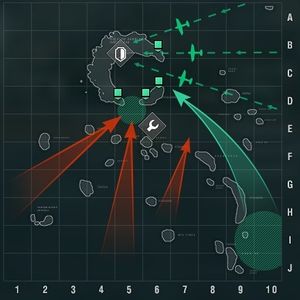 Players must defend transport aircraft and fend off waves of enemies.

The Ultimate Frontier is a PVE Scenario which has the friendly task force defend the evacuation of Rouen Atoll. Players are tasked with destroying attacking enemy ships and aircraft, and may take Tier VII ships into the operation. The allied force consists of 7 player ships. 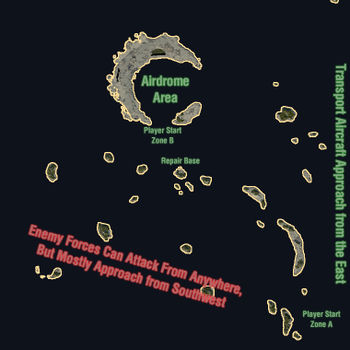 Upon spawning, players will find themselves taking part in the defene of a group of Japanese scientists and engineers being evacuated from the besieged Rouen Atoll. Squadrons of transport aircraft are tasked with their evacuation. Players will need to defend these aircraft and the base through two stages of the operation.

In stage one, the transport squadrons need to be escorted to the airdrome where the research team awaits extraction. The transport aircraft (marked by a new icon) arrive from three separate locations. Focus on keeping the skies clear for them to reach to the extraction point! However, a fleet of enemy AA-heavy cruisers will spawn along with an escort fleet of battleships, destroyers, and a cruiser. Players should prioritize the cruisers to reduce the enemy team's AA firepower. If these cruisers are left alone, they will shoot down supply aircraft, leading to the failure of one of the secondary objectives.

In stage two, the extraction begins. Players will need to defend the airdrome and surrounding structures from waves of enemy attacks until the timer for extraction completion counts down. A nearby repair base can help keep player ships afloat between waves. Fortunately, attack aircraft will support the team by taking off from the airdrome and attacking an enemy ship in each wave. After successfully defending the base, players can stage a counter-attack to cap off a successful Operation. Take out the remaining enemies, including an old friend from a previous Operation – the carrier Raptor!

Retrieved from "http://wiki.wargaming.net/en/index.php?title=Ship:The_Ultimate_Frontier&oldid=268850"
Category:
Your location:
To log in, select the region where your account is registered
CIS Europe North America Asia Republic of Korea
Or use Microsoft Login to enter WoT XBOX ecosystem
Log in