Armor in World of Warships is not just a uniform barrier to be pierced (like in World of Tanks), but rather a kind of multi-layered “cake” that covers a number of construction elements and mechanisms, each having specific armoring. A projectile that enters the ship can encounter up to four or five layers of armor and may be stopped or ricochet at each layer. In this regard the developers attempted to adhere to historical realism and simulate all significant layers of armor. The armor tends to be very heavy: on a typical battleship it takes up around 40% of the total displacement of the vessel.

Therefore, battleship designers tried to save some of that weight by placing heavy armor only around the vital parts of the ship: the ammunition and propellant magazines, the propulsion plant, the fire-control, command and communications sections. Most of the other compartments are almost completely unarmored. This approach of providing either total or negligible protection is referred to as "all or nothing". In effect, the scheme accepts vulnerability to medium-caliber and high-explosive shells striking the unarmored sections of the hull, in order to improve resistance against the heaviest armor-piercing shells, while at the same time being able to carry a powerful armament and retain useful speed and endurance. 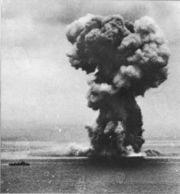 The ship's vital parts are protected by a citadel, which can be visualized as an heavy armored box within the ship which contains the most vital machinery and vulnerable ammunition stores. Although it was desirable for the citadel to be as small as possible, the space enclosed was an important source of reserve buoyancy, and helped prevent the ship from foundering when other compartments had flooded. In game, successfully causing damage to the citadel causes shells to inflict their maximum damage and such damage is the most difficult to repair. 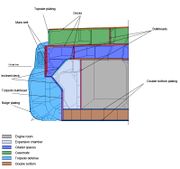 From the citadel box, shafts known as barbettes lead upwards to the ship's main gun turrets and conning tower. The ship's magazines are located in or around the turret barbettes, and contain the main caliber shells, as well as the gunpowder charges. Penetrating the citadel armor around the magazine and detonating the stored ammunition often results in a spectacular one-shot kill.

How can a player know where these important compartments are when he or she fires into the side of an unfamiliar ship? The citadel is rarely any further forward on a ship than her fore-most turret, and likewise rarely any closer to the stern than the aft-most turrets. Most ships citadels have their roof a short way above the waterline and on some the added plating on the side of the ship distinguishes the ships citadel belt (the side armor that protects the citadel) from the casemate belt (with the casemate being the rooms ontop of the citadel that form the deck that the superstructure sits upon). The armor scheme of ships is viewable ingame by expanding the Armor Layout section of the ships parameters found on the right hand side when viewing any ship in port.

In addition to belt armor, which protects battleships from direct fire, they also have deck armor that protects them from plunging fire -- shells at extreme engagement ranges tend to hit the top of the ship and aerial bombs. However, due to to a large area that would have to be protected, battleships' deck armor is much thinner than the belt armor. As such, shells fired to strike the deck may be able to defeat the armor while those same shells may be incapable of penetrating the side armor of the target vessel.

That is why, unlike the vehicles of World of Tanks, ships in World of Warships are divided into multiple compartments, each with a different value of hit points (HP). Roughly, the compartments are as follows: bow, stern, citadel, casemate (center part minus the citadel), and the superstructure. The total value of HP for all the compartments is roughly twice the ship's total hit point value ( fighting efficiency): in real life, the ship would be out of battle long before every last portion of it is destroyed. Furthermore, dealing repeated damage to the same part of a ship becomes increasingly inefficient as a ship cannot be sunk by damaging only one compartment of the ship alone (unless that compartment is the citadel). This reduction is called Saturation;

HE coefficients are summarized in the following table:

Gun caliber * the penetration coefficient with the result rounded to the nearest mm (.5 rounds up). This resulting value is the armor thickness that a HE shell can penetrate. Instead of multiplying by 1/4 or 1/6, you can instead divide by 4 or 6 as the math is the same. Here are some examples.

Bounce or ricochet angles are stated in reference to the perpendicular, as in the illustration below, that is to say they are relative to a ship being parallel being 0°. The standard angles for AP ricochets are:

Ricochet is not always possible; see Overmatch below.

If an AP shell strikes a target at an angle that causes it to ricochet no damage is dealt and the attacker receives a ricochet ribbon.

Some ships fires shells that do not conform to standard angles and have "improved" angles, requiring the target to angle even further from the perpendicular to cause the shells to ricochet.

The following table shows the ricochet angles for AP shells:

*Due to this setting, Tachibana's AP will never ricochet. This is not a bug.

The following table shows the ricochet angles for SAP shells:

Special limit:
Damage to a destroyer caused by an AP or SAP shell with a caliber of 280 mm or larger cannot exceed 10% of the shell's maximum damage.[2][3]

Properly angling the ship matters a great deal when the enemy is shooting AP shells: when an AP shell encounters armor at an angle, it has to pass a greater amount of armor for penetration. Additionally, at shallow angles to the surface the shell will simply ricochet, even if it might otherwise be able to penetrate. A ricocheting shell may still cause damage, but only to the same ship. For heavy shells vs. thin armor, ricochet cannot occur; see Overmatch below.

If the armor thickness is less than 1/14.3 of an AP or SAP shell's caliber, a ricochet does not occur regardless of armor encounter angle. See this table for examples.

Normalization is modeled by shell caliber.

Seawater is really good armor. However, shells that impact the sea in close proximity to a ship can still have significant effects.

As the shell (etc.) slows, it loses energy. Thus penetration decreases significantly over distance. However, the shell may still retain enough energy to penetrate a ship before the fuse timer expires, especially if it just happens to encounter a lightly armored section of the hull.[5] Underwater penetrations do not cause flooding.[6]

Knowing that seawater is essentially liquid armor, armor systems designers save weight by providing little armor protection more than a meter or two below the waterline. Ships with torpedo protection systems likely will absorb such a hit in the torpedo bulge. Small ships such as destroyers with no armor to speak of may be 'penetrated' by a shell that would otherwise 'overpenetrate'.

Retrieved from "http://wiki.wargaming.net/en/index.php?title=Ship:Armor_Penetration&oldid=316481"
Categories:
Your location:
To log in, select the region where your account is registered
CIS Europe North America Asia Republic of Korea
Or use Microsoft Login to enter WoT XBOX ecosystem
Log in