Available during Update 0.7.3, Space Battles offer captains a unique way to experience World of Warships: in the vast depths of space! The mode offers nine uniquely-skinned Tier X ships to choose from, each with an even more unique captain. Economic rewards, however, are equivalent to Tier VII matches, and the only achievements that can be earned are achievements unique to the mode.

Space Battles are similar to Random Battles, with a few small variants.

Only nine (9) ships are available in this mode; all are re-skinned variants of the following Tier X ships:

Spaceships and their commanders are credited to players' accounts after completing a simple mission. Players that win a battle in a Tier VI-X cruiser will be awarded four ships: Galaxy (Des Moines), Aurora (Moskva), Norma (Minotaur), and Zaya (Zao). For victory in a Tier VI-X destroyer, captains receive Blue Aster (Z-52) and FlyFire (Gearing). The mighty Alldestroyer (Großer Kurfürst), beautiful Paris (République), and elegant Hellcarrier (Hakuryu) will become available to players who win in a Tier VI-X battleship or aircraft carrier, respectively. 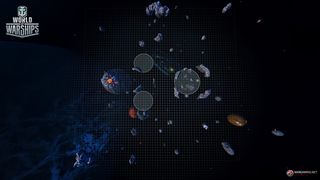 Space Battles occur on a specially-designed variant of "Hotspot".

Space Battles take place on a special map in outer space with asteroids as the only cover and a vacuum instead of water. The prototype for this map is the familiar "Hotspot" map with two variants of key areas. Captains will know one of them from Random Battles, and the other variant was used in Clan Battles.

To make space combat even more spectacular, special weather events have a chance to occur, based on new mechanics players may have already encountered in Operation Hermes. The only difference is that the thunderstorm front has been replaced with two new weather phenomena, each producing a different effect in battle. Players can see the zone of each weather event on the minimap; it will be displayed as a grey circle. Also, a special indicator will notify captains when they are approaching or within the Psy Field or Meteor Shower. Meteor Shower and Psy Field can't occur in one battle simultaneously.

A Meteor Shower moves leftwards from the right side of the map, producing the following effects on the characteristics of ships that enter it:

A Psy Field moves leftwards from the right side of the map, changing the characteristics of ships affected by it as follows: Economic rewards from Space Battles are equivalent to those found in Tier VII Random Battles.

Take part in Space Battles, explore the vast uncharted corners of the universe and earn valuable prizes! Complete special combat missions to get "space" containers, which may contain special signal flags that provide large economic bonuses, or unique patch symbols that are only available via Space Battle mode.

Five unique patches are available via playing Space Battles.
Retrieved from "http://wiki.wargaming.net/en/index.php?title=Ship:Space_Battles&oldid=272169"
Your location:
To log in, select the region where your account is registered
CIS Europe North America Asia Republic of Korea
Or use Microsoft Login to enter WoT XBOX ecosystem
Log in