Hits from four types of ordnance can cause a ship to catch on fire:

It is impossible to cause a fire on an allied ship.[1]

A "Set on Fire" ribbon is awarded for each individual fire set on an enemy ship.[2]

Every ship has four distinct zones along its main deck that can be set on fire, fore, aft, and two amidship. Thus the maximum number of fires on a ship is four. The commander skill Fire Prevention for battleships reduces the number of fire zones to three (one amidship). Submarines can only have one active fire, in the amidship section.

Fire Chance (the chance a shell or bomb will set a fire) is calculated by combining a base chance for the ordnance to set a fire, the target ship's intrinsic resistance to fire, and certain modifiers, as shown below.

Each ship hull has an intrinsic resistance to fire. The amount of resistance is based on ship type, ship tier, and the hull that is currently equipped (Stock or Top). (Premium ships all have the Top Hull.) This resistance is expressed as the Fire Resistance Coefficient (FRC). The lower the coefficient, the more resistant the ship is to catching fire.

The Fire Resistance Coefficients (FRC) are shown below:

"Projectile Base Fire Chance" for artillery is displayed in the Port screen by mousing over the Main Battery or Secondary Armament entries in the Artillery section. Only HE shells have a Fire Chance. In addition, each ship entry in this wiki includes the fire chances for main and secondary HE shells.

For aircraft bombs and rockets, the base fire chance is a characteristic of the size and type of ordnance used and varies between 4% for small rockets carried by attack squadrons and 64% for large HE bombs. See the tables in the Aircraft article for more info. The information can also be view in the Port screen by mousing over the appropriate type of squadron in the Aircraft section.

The chance to set fire for a single high explosive shell hitting a ship is calculated by the following formula (the formulas for airborne rockets and bombs are similar):

As an example, we can compare the chance of a single Benson high explosive shell lighting a fire on an enemy Bismarck.

The fire chance (per hit) would be:

If the Benson commander didn't have Pyrotechnician or the signals equipped, the chance would be:

The above example can be used to demonstrate the usefulness of the Pyrotechnician skill on certain ships, especially those with a high rate of fire and a low individual fire chance per shell (such as Atlanta, Gearing, or Akizuki). 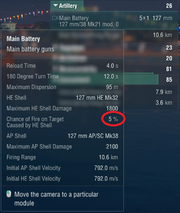 A shell's base fire chance can be found by hovering the mouse over the Main Battery information in the Port screen.

Captains of battleships and large cruisers can quickly see, then, that while one fire might be considered a nuisance, two or more are a major threat to the ship.

Fire does not increase the detectability of submarines.

consumable, or by waiting for the fire duration timer to expire. The duration of a fire can be reduced in several ways:

Each of these effects stacks with the others; however, they are multiplicative rather than additive.

The below tables provide the fire durations and total health loss for the different combinations of the above three effects.

consumable. Note that a standard Repair Party heals up to 14% of a ship's base health (16.8% with the India Delta (

) signal) over 28 seconds, comparable to a single fire on a battleship depending on other modifiers.

How to quantify the effect of fire chance modification by Special_Kay.

ru:Ship:Пожар
Retrieved from "http://wiki.wargaming.net/en/index.php?title=Ship:Fire&oldid=322458"
Categories:
Your location:
To log in, select the region where your account is registered
CIS Europe North America Asia
Or use Microsoft Login to enter WoT XBOX ecosystem
Log in