Widely known in real life as "Elefant", it is a slow but powerful Tank destroyer, reasonably well-protected for its class, the Ferdinand can be an intimidating opponent and can utilize its armor to engage enemies more closely than most tank destroyers. The Ferdinand's mantlet is extremely strong, but not invincible, and the rather big target silhouette means that you will have a lot harder time hiding than in the Jagdpanther. However, upgraded with the 12.8 cm PaK 44 L/55, you pack quite a lot more punch than the Jagdpanther, and will be able to terrorize tanks and support pretty much every tier heavy tanks from distant positions. The Ferdinand should not be taken lightly as an opponent.

Many players compare this tank with its twin, the Jagdpanther II as it carries the same guns and has (almost) the same reload time, but the Ferdinand puts emphasis on its better armor allowing it to bounce hits more often, while being slower than the Jagdpanther II, it makes up with the very good gun traverse and gun depression, requiring to move very little when readjusting the aim against an enemy.

The stock Ferdinand, essentially, must be used as a sniper only. Once upgraded to elite status, it can be used as a Hetzer-like tank in the front lines; its 200 frontal armor will suit it well to stay behind KV and IS tanks, so long as you are able to hide your lower glacis, a major weak point.

With a front and superstructure bolstered with 200mm of armor, as well as its powerful top gun, this tank functions very well as a hull down sniper. Tier 6, 7, and even some tier 8 tanks are going to have some major problems penetrating you from the front, but your armor is no match for tier 9 and 10 tanks. You're not particularly fast, nor can you turn very quickly, this combined with your very weak back and side armor results in this tank being flanked incredibly easily. When moving up, always have support or you're going to find this powerful tank destroyer a smoldering pile of twisted steel.

Elefant is the common name of a German tank-destroyer of World War II. The official German designation was Panzerjäger Tiger (P). The ordnance inventory designation was Sd. Kfz. 184.

The Elefant (German "elephant") was a "Schwerer Panzerjäger" (heavy tank-destroyer) of the German Wehrmacht, initially built under the additional name Ferdinand, after their designer Ferdinand Porsche, before it was changed to Elefant.

The design evolved from cruder, improvised designs of 1941–42, as well as the later, but still defective, Marder designs. The chassis was created from the 90 Porsche Tiger I models already built with new tracks and an all-steel wheel arrangement. Suspension consisted of six twin bogies with longitudinal torsion bars. The engines were placed in the middle of the hull to give room for the armament at the rear in a simple, casemate-style box structure, with slightly sloped sides, on top of this chassis. The engines drove electric generators, which in turn powered electric motors connected to the rear sprockets. Porsche had experience in this form of petrol-electric transmission extending back to 1901, when he designed a car that used it.

The driver and radio operator were in a separate compartment at the front. Surprisingly, the "slack track" setup on the "Porsche Tiger" chassis, on which the Elefant vehicles are based, at first glance appears to have used two drive sprockets per track; where the frontmost wheel is sprocketed, just as the rear drive sprocket is, and the innermost surface of the front sprocket, nearest the hull, seems to have had a drum brake fitted to act as the track brake.

An Elefant disabled somewhere in Italy, 1944.

The vehicle was fitted with an 88 mm Panzerabwehrkanone (PaK) 43/2 L/71 gun. The L/71 had originally been developed as a replacement for the famous 88 mm anti-aircraft gun that had been used against Allied tanks in the Western Desert Campaign, although it was never fielded as an anti-aircraft weapon. The L/71 had a much longer barrel than the L/56 Flak 18 and Flak 36 guns, which gave it a higher muzzle velocity. It also fired a different, longer cartridge. These improvements gave the 88 mm L/71 significantly improved armor penetration ability over the earlier 88 mm. As fitted, the gun was capable of only 25° traverse and a similarly limited elevation.

Porsche AG had manufactured about one hundred chassis for their proposed version of the Tiger tank, the "Porsche Tiger" in the Nibelungenwerk factory in Sankt Valentin, Austria, with both Henschel and Porsche chassis using the same Krupp-designed turret: the Henschel design having its turret more-or-less centrally located on its hull, with the Porsche design placing the turret much nearer the front of the superstructure. Since the competing Henschel Tiger design was chosen for production, the Porsche chassis' were no longer required for the Tiger tank project. It was therefore decided that the Porsche chassis' were to be used as the basis of a new heavy tank-destroyer, mounting Krupp's newly developed 88 mm Pak 43/2 anti-tank gun. This precise long-range weapon was supposed to take out enemy tanks before they reached their own range of effective fire. Ninety-one chassis were converted (chassis number 150010 to 150100).

The two Porsche air-cooled engines in each vehicle were replaced by two 300 hp Maybach HL 120 TRM engines powering two generators that drove two electric motors which, in turn, powered the drive sprockets. The electric motors also acted as the vehicle's steering unit. This so called "petro-electrical" drive delivered 0.11 km/l off road and 0.15 km/l on road at a maximum speed of 10 km/h off road and 30 km/h on road. Besides the high fuel consumption and the poor performance, the drive system was also maintenance-intensive: the sprockets, for example, had to be changed every 500 km.

Add-on armor of 100 mm was bolted to the front plates, increasing the plate's thickness to 200 millimeters and adding another 5 tons of weight. The large, fixed casemate-style housing for the gun and most of the vehicle's crew was mounted in the rear end of the vehicle. As the engines were placed in the middle, the radio operator and the driver were separated from the rest of the crew and could be addressed only through radio. The work was completed in just a few months from March to May 1943.

In September 1943, all surviving Ferdinands were recalled to be modified based on battle experience gained in the Battle of Kursk. During October and November 1943, 48 of the 50 surviving vehicles were modified by the addition of a ball-mounted MG 34 in the hull front (to improve anti-infantry ability), a commander's cupola (modified from the standard StuG III cupola) for improved vision, and the application of Zimmerit paste. This and other minor armor changes increased the weight from 65 to 70 t. These improved vehicles were then unofficially called Elefant, and this became the official name by Hitler's orders of May 1, 1944.

Five Bergepanzer Tiger (P) armored recovery vehicles were converted in Autumn 1943. Three from Tiger (P) prototypes, and two more from battle-damaged Ferdinands and not suitable for the Elefant modification. 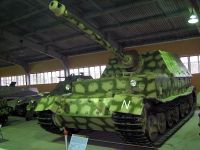 The units were deployed at a company level, sometimes sub-divided into platoons, with infantry or tanks to protect the vulnerable flanks of the vehicles. On the attack, this Jagdpanzer was a first-strike vehicle, while in defense, they often comprised a mobile reserve used to blunt enemy tank assaults.

All but two of the 91 available Ferdinands were put to use in the Battle of Kursk, the first combat the Ferdinand saw. Although they destroyed many Russian tanks, they performed quite poorly in other respects. Within the first four days, nearly half of the vehicles were out of service, mostly due to technical problems and mine-damage to tracks and suspensions. Actual combat losses to direct Soviet action were very low as the Ferdinand's very thick armor protected it from almost all Soviet antitank weaponry. However, at this point in its development, the Ferdinand lacked a machine gun or any secondary armament, making it vulnerable to attack by infantry. Most total losses of the Ferdinand occurred during the Soviet counter-offensive after the Kursk offensive, as many damaged Ferdinands had to be abandoned as they were too heavy to tow and others were lost to mechanical breakdown during the retreat. The surviving vehicles saw further limited action on the Dniepr front during late 1943.

At this point they were recalled and modified at the works in Austria and received the name Elefant. While the modifications improved the vehicles, some problems could never be fully fixed. In 1944, Elefants served on the Italian front, but were rendered rather ineffective, as their weight of nearly 70 tons did not allow them to use most Italian roads and bridges. Due to a permanent lack of spare parts, most of the units were not destroyed in battle, but abandoned and blown up by their own crews. One company of Ferdinands saw action during the Soviet's January 1945 Vistula-Oder Offensive in Poland, and the very last surviving vehicles were in combat at Zossen during the Battle of Berlin.

The Ferdinand/Elefant might well have been the most successful tank destroyer employed during the war in kills per loss, reaching an average ratio of approximately 10:1. During the Battle of Kursk, the sPzJagAbt 653 claims to have knocked out 320 enemy tanks at the price of 13 Ferdinands. This impressive average ratio was due to its extreme firepower and protection, which gave it an enormous advantage when used in head-on combat or a static defensive role. However, poor mobility and mechanical unreliability greatly diminished its offensive capability.
click to read more...