Contrary to what the ingame description says, the Panther/M10 actually saw action on 21 December 1944, not February 1945.

Anyone that has driven a Pz.Kpfw. V Panther will feel right at home. The Panther-M10 is basically a Panther without the magnificent 75mm L/100 gun, 50 less horsepower (which is barely noticeable), and a larger turret. No less of a good tank, the Panther-M10 has an improved aim and reload time with the well proven 75mm L/70 gun and it is still able to put its weight into fights. The tank's low repair costs and high credit income makes it more cost-effective compared to the regular Panther.

The Panther/M10 is the first tank to sport a different color from the rest of the tanks of its nation. Instead of German grey, it is American olive drab; and as of 8.6, it sports the American star rather than the Iron Cross. As of 8.9, American camouflage patterns and inscriptions are available for it.

With this tanks strengths and weaknesses it can take on most tier 7's and under with minimal help, but only a teammate or two will help you do a bit more damage or prevent them from circling around. A big problem for this tank is its low alpha, making this tank very weak against most tier 8 heavy's with their large health pools and high powered weaponry. Even though this tank has only an average of 135 damage per shot, you can still deal a good amount of damage even to tanks such as the T29 or Tiger II if you aim for their weak spots and disable critical modules allowing you to gain control of the situation.

You must always keep in mind that with this tank you are a support unit, with your role being to assist your teammates in battle. As a result, always aim for the enemies tracks, engine, or any other vulnerable parts of the vehicle that can disabled to make it easier to allow your team to finish the job. With its fire rate and accuracy, you are guaranteed to be able to continually disable them. Also, as a support unit, you should always be watching the flanks and trying to keep up with the movements of your enemies if possible, since you do not want to be the person that misses the scouts breaking through your lines of defense. Here, the good turret traverse, RoF, and accuracy make it excellent at tracking and killing scouts.

The Panther/M10 should not be driven head on against heavy tanks as the damage it inflicts can be rather low. This tank excels as a sniper or support unit, and it is very maneuverable, being able to assist tanks quickly on separate fronts, and can lay waste to any tier 7 (or lower) medium and light tanks with little effort. Keep in mind that heavy tanks are frequently encountered in tier 7 and 8 battles, so putting the M10 on the front lines can result in almost certain death.

This tank excels especially when played in a wolfpack of two or more mediums in a platoon. A wolfpack is able to deal considerable damage to enemy tanks that have been separated from their allies.

Do not judge its armor too harshly - it is able to bounce shots from many vehicles in a similar fashion to the original Panther in game, even being able to occasionally bounce the KV-1S/IS' 122mm guns with a good angle. The Panther/M10 also lacks a cupola; it was historically removed as part of disguise. This is reflected in its view range, but makes it good in hull-down locations. The gun mantlet has a habit of taking 0 damage from shots, but don't trust it too much. Due to its high profile, hiding from behind a bush will still reveal the tank's position even when sniping from long range (depending on an enemy tank's view range). Unless you're a dedicated sniper, training the Camouflage skill as early as possible is a must. 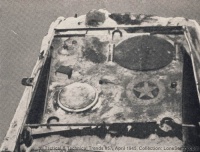 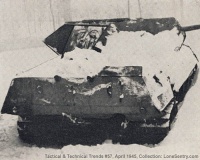 Panther/M10, eventually all were destroyed by enemy fire
The false rear was made of sheet metal. It was a faithful duplicate of the M10 rear except for two holes to permit the twin exhaust elbows of the Panther to protrude. An attempt was made to imitate the skirting armor of the M10 which appears to hang lower than the side armor of the Panther and is bevelled in at the bottom. A long flat strip of sheet metal was attached to the sides parallel to the ground, and a vertical sheet strip was attached at right angles to this strip to give the appearance of low skirting armor. While a few of the jeep commando teams easily slipped through American sentries and roamed freely behind American lines, but the rest of the unit languished with Sixth Panzer Armee. When it became apparent that no breakthrough was going to occur, the "Ersatz M-10's" were committed along with the rest of the brigade as a normal combat unit. Ultimately all of the vehicles were destroyed or disabled in the fighting.
click to read more...