A typical British battleship of World War I. The ship carried the same main battery guns as the battleships of the preceding class, but was armed with more powerful secondary battery guns.

Iron Duke is fitted with ten 343mm guns in a layout similar to König and New York. While Iron Duke’s armor piercing shells are often effective against cruisers and other lightly protected targets, they may struggle to deal damage against other battleships; when facing higher tiered or heavily angled battleships, captains should consider switching to high explosive shells. The high alpha damage and fire chance on the HE shells makes them quite effective at damaging targets that the AP shells would normally not harm. Additionally, Iron Duke suffers from a slow turret traverse speed. Captains must plan ahead and begin turning their guns before entering an engagement with enemy ships. In certain situations, it may also be quicker to turn the whole ship rather than wait for the turrets to traverse.

In addition to her main battery, Iron Duke carries a large secondary armament for her tier. While these guns are not as effective as some higher tier battleships’ secondaries, they can help fend off destroyers who sail too close to the ship. The secondary guns may also prove useful in close quarter engagements with other battleships due to the high fire chance they possess.

Expert Loader is the most useful option amongst the Level 1 skills. This skill reduces the time needed to switch shell types if the main battery guns are already loaded. Priority target can also prove useful by alerting captains to how many ships are currently targeting them. For Level 2 skills, Expert Marksman is recommended to reduce the turret traverse time. Captains looking to improve the surviability of the ship may also opt for High Alert or Jack of All Trades for the reduced consumable cool down.

At Level 3, Superintendent is recommended for an extra charge of the Repair Party consumable. Basics of Survivability is also recommended to reduce the time required to repair fires, flooding, and module damage. Captains may also choose to take Basic Firing Training to improve the effectiveness of the anti-aircraft and small caliber secondary guns. Concealment Expert is recommended at Level 4 to reduce the ship’s detection radius, allowing captains to close in unnoticed. Fire Prevention is also recommended to reduce the risk of fire and maximum number of fires on the ship. Advanced Firing Training can be taken to increase the firing range of the secondary and anti-aircraft guns.

Mounting the premium variants of these consumables is recommended to decrease their cool down and improve the ship’s survivability.

Type 1, 2, or 5 camouflage can be equipped for credits; Types 2 or 5 are recommended at a minimum to reduce the accuracy of incoming shells. Other camouflages such as the Ocean Soul camouflage may also be used to boost the experience or credit gain per battle.

) to increase the amount of hit points the repair party consumable can recover. Sierra Mike flags ( 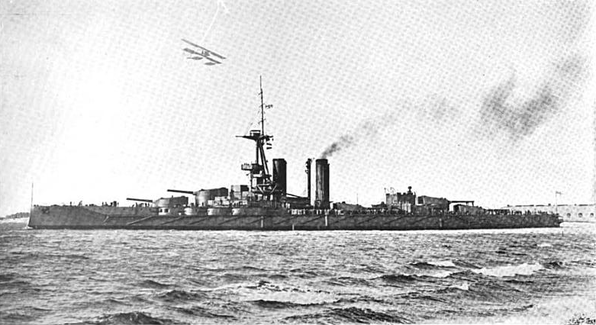 The 1911/1912 Naval construction programme consisted of four new battleships and a new battlecruiser, like the programme before it. The new class of battleships were developed from the previous class, the King George V-class, which were slight modifications of the previous Orion-class before them. The new Iron Duke-class would introduce more changes, though none too substantial.

The preliminary design series for the class differed mostly in the secondary battery, varying the calibre and number of the guns, as well as the protection. The design chosen was 'MIV', which used twelve 152mm guns with 4-inches (102mm) of armour protection, as opposed to the sixteen 102mm guns in the previous King George V class. The increase in calibre was so the ship could effectively engage new German torpedo-boats with longer ranged torpedoes. Design 'MIV' was further modified after being approved, with the shaft horsepower being increased to 29,000 from 27,000 to attain the desired speed of 21 knots, and the secondary battery protection being improved to 6-inches (152mm). Furthermore, the design removed the stern torpedo tube, in favour of two torpedo tubes per broadside, submerged beneath the waterline. Correspondingly, the armour aft was improved to protect the new aft torpedo tubes and steering gear. Parts of the conning tower were also cut away to provide control towers for the secondary battery.

There were also proposals to mount eight 76mm (3-inch 12pdr) guns as further defence against torpedo-boats and destroyers, but these were later removed, as these guns were deemed ineffective in this role. However, two 76mm/45 QF Mk.I guns were retained and mounted on the aft superstructure for defence against airships and for anti-aircraft fire, a first for Royal Navy battleships. To carry the weight of new gunnery directors, a distinctive tripod mast was fitted.

The Iron Duke-class kept the same main armament and main armour scheme (barring the secondary and aft) as the previous King George V-class. Ten 343mm (13.5-inch) Mk.V guns were mounted in five two-gun turrets, two aft 'A' and 'B', 1 amidships 'Q', and two aft 'X' and 'Y'. These guns fired a heavier shell than that found on the Orion-class, for a better striking velocity at range. The main armour belt was 305mm (12-inches) thick while the upper belt was 203mm (8-inches). Fore and aft belts, as well as the secondary gun casemates were 152mm (6-inches) thick. The ship was powered by four shaft Parsons steam turbines, with 18 Babcock & Wilcox boilers providing steam, producing 29,000shp, giving a normal top speed of 21.25 knots. However, in Marlborough and Emperor of India, Yarrow boilers were used instead.

All four ships of the class were laid down in 1912, and completed in 1914. The ships were Iron Duke, Marlborough, Benbow, and Emperor of India. Originally, a pair of 152mm secondary guns were mounted aft beneath the rear turrets, but these proved to be too wet in combat and almost useless, so were moved above the rest of the 152mm guns in unarmoured casemates. Iron Duke also had torpedo nets removed before her commissioning, while her three sisters never received them.

HMS Iron Duke, the lead ship of her class, named in honour of Arthur Wellesley, 1st Duke of Wellington. She was built by Portsmouth Dockyard, she was commissioned into the Home Fleet in March 1914 as the fleet flagship. Iron Duke served as the flagship of the Grand Fleet during the First World War, under the command of Admiral John Jellicoe, including at the Battle of Jutland in 1916. There, as the ninth ship in the battle line, she inflicted significant damage on the German battleship SMS König early in the main fleet action, scoring 7 hits. Iron Duke is also credited for sinking the V-25-class torpedo boat, SMS S35. In January 1917, Queen Elizabeth became the new fleet flagship. After the war, Iron Duke operated in the Mediterranean as the flagship of the Mediterranean Fleet and participated in both the Allied intervention in the Russian Civil War in the Black Sea and the Greco-Turkish War. She also assisted in the evacuation of refugees from Smyrna. In 1926, she was assigned to the Atlantic Fleet, where she served as a training ship.

Iron Duke remained on active duty for only a few more years; in 1930, the London Naval Treaty specified that the four Iron Duke-class battleships be scrapped or otherwise demilitarized. Iron Duke was therefore converted into a gunnery training ship; her armour and much of her armament was removed to render her unfit for combat. She served in this capacity until the outbreak of the Second World War in September 1939, when she was moored in Scapa Flow as a harbour defense ship. In October, she was badly damaged by German bombers and was run aground to avoid sinking. She continued to serve as an anti-aircraft platform for the duration of the war, and was eventually refloated in 1946, and sold for scrapping in 1948.

HMS Marlborough, named for John Churchill, 1st Duke of Marlborough, was commissioned on the 2nd June 1914, serving as the second in command ship in the Grand Fleet. Aside from the Battle of Jutland, war service consisted of routine training and sweeps of the North Sea. At Jutland as the twenty-first ship in the line, Marlborough fired upon the cruiser SMS Wiesbaden, however a torpedo likely fired from the Wiesbaden hit Marlborough, causing significant flooding and damage, though the ship was able to keep pace with the battle for some time, before being ordered to port early to repair the damage. During the battle, Marlborough also fired at Kaiser-class battleships and scored 3 hits on the König-class SMS Großer Kurfürst. Although the flooding became worse as she returned home, Marlborough made it to be repaired. In 1918, alongside her sisters, she was assigned to the Mediterranean Fleet, and later supported the White Russians in the Russian Civil war, evacuating members of the deposed royal family. She continued to serve in the Mediterranean, and then in the Atlantic Fleet as a training ship from 1926. Marlborough was decommissioned in 1929, and used as a target ship for aerial bombs and shellfire of different calibres, before being scrapped in 1932.

HMS Benbow was commissioned on the 7th October 1914, and named in honour of Admiral John Benbow. Her service mirrored that of her sisters, taking part in numerous cover sweeps, including that of the raid on Tondern. At the Battle of Jutland, Benbow was the thirteenth ship in the line, flagship of the 4th Battle Squadron. She mostly fired at the disabled Wiesbaden and torpedo-boats making torpedo attacks on the British line, but the number of hits made by Benbow is impossible to ascertain. Benbow was assigned to the Mediterranean Fleet post war, and supported the Russian Civil war and Greco-Turkish war. She was also transferred to the Atlantic in 1926, and broken up for scrap in 1931.

HMS Emperor of India was originally due to be called HMS Delhi, but the name was changed to honour King George V (The Emperor of India) before completion and commissioning on the 10th November 1914. Although taking part in numerous uneventful operations and sweeps early in World War 1, Emperor of India missed the Battle of Jutland, as she was in dock undergoing a refit. Following her sisters, during the Russian Civil war, she bombarded the Black Sea port of Novorossiyisk in support of the White Russians. Emperor of India was decommissioned in 1931, and used as a target ship, running aground during this final service, being bombarded by her sister, Iron Duke. She was re-floated and sold for scrap in 1932.