British heavy tanks start off as mid-tier infantry tanks, and as such are slow and ponderous, reasonable guns for their tier with an emphasis on fire rate over alpha damage. They eventually become incredibly accurate support tanks, better at moving to positions and giving covering fire than engaging head to head. They also get good on the move accuracy and low aim times. Their armour is generally on the weak side. The guns on most British heavies have more in the way of sustained DPM than alpha damage and have the best penetration for their tier with the exception of the Black Prince.

British Tank Destroyers, up to tier 4, are mostly conversions of other tanks into Tank Destroyers, which are fast and lightly armored. However, their gameplay reverses from tier 5 to tier 9, becoming extremely thick skinned, but somewhat unwieldy and sluggish assault guns with low damage but very fast firing guns and health pools which rival medium or even heavy tanks of the same tier. Between these tiers their guns get increasingly capable while their armor becomes increasingly mediocre, but they all have the same large, weak commander's hatch. Despite their armor artillery is still capable of dealing a lot of damage with a direct hit. The tree ends with the poorly-armored but agile and extremely powerful FV215b (183), which is essentially a direct fire artillery with an incredibly powerful premium round. There is also a second line of tank destroyers starting from the Grant medium tank. The first tank, the Archer is quite different from any other tier V tank destroyer: the gun is facing the rear side of the tank, so this vehicle is faster moving backwards than forwards. In general,these tank destroyers trade the armor of the first line for their great mobility and turrets. 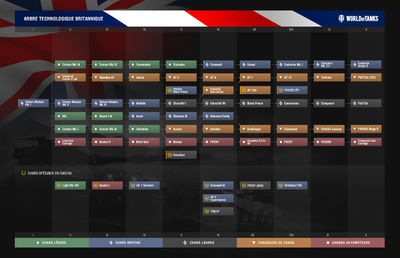