The Sexton II is similar in performance to the M7 Priest, although while the Priest has a slower firing, more inaccurate gun with huge damage, the Sexton II has a fast-firing gun with underwhelming damage and penetration. Despite this, it's not a bad SPG, as the high rate of fire, decent accuracy and huge ammo capacity enable you to dish out shells in a steady rate. The mobility is very similar to the Priest with good straight-line speed and lots of horsepower, although any kind of attempted turning will slow you down greatly. The traverse rate is poor, but once you get up to speed you can outrun many would-be assailants. The decent armor and health allow you to survive a little longer than some other SPGs against enemy fire, but are still nothing to rely upon, as you will go up in flames if anything with decent damage output comes your way. Against autocannon-toting scouts, however, your good gun depression coupled with the decent durability of your armor will allow you to take potshots at them from point-blank range if one gets too close for comfort. However, don't expect to survive anyone who fires at your superstructure, as it can be penetrated even by the weakest High-Explosive shells. Your traverse rate is poor, however, so any scout that gets close enough will have no trouble literally running circles around you, and the low damage and penetration mean that the scout doesn't necessarily die if you hit it. You may have to move up to 100-200 meters from your deployment point on large maps due to the unexceptional shell range, at least if attempting to fire from corner to corner. 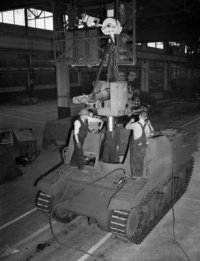