Most destroyers and some cruisers mount one.
——  Smoke Generators of the World  ——  (click here)

A smoke generator produces smoke 'puffs' at regular intervals that merge to form the smoke cloud or screen. All smoke has the same concealment effects but can vary in other characteristics: 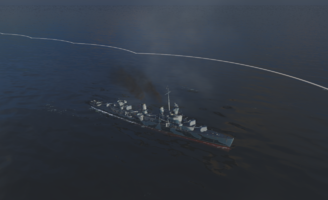 An angry Fletcher in her smoke screen, preparing to engage the enemy.

A smoke screen does one thing: it obscures vision, preventing those outside the smoke from seeing into or past it. The effect applies equally to ships inside a smoke screen: a ship in smoke can target an opponent at range, but someone else must spot it for her. In terms of detection, smoke interrupts line-of-sight (LoS). Any ship may enter or use a smoke screen, even if it was laid by the enemy.

The vision obscuring effect is not absolute; within the assured detection range ships detect each other without regard to LoS. The range is typically 2.0km but can be increased. There are also counters to smoke. See below.

Within a smoke screen, a ship cannot be spotted by aircraft, even if it is firing at them or someone else.[1] However, a ship in smoke that is spotted by other means is visible to and can be attacked by aircraft.

Fire on a ship concealed by smoke does not increase its visibility.

Smoke has no effect on the spotting of torpedoes. [unconfirmed]

When activated, a smoke generator produces "puffs" of smoke[2] at regular intervals for the emission time listed. Puffs are stationary; they do not move. They do overlap. Taken together, the puffs form a smoke cloud or smoke screen. After a certain period, the puff dissipates. Eventually, so does the entire cloud.

Rather than having to watch the clock or guess when a smoke screen is due to dissipate, there is a UI feature[3] - a Smoke Timer - that can be displayed to the upper left of the aim point on the battle screen.[2]

All smoke screens have the same concealment effect but can vary widely in other characteristics. 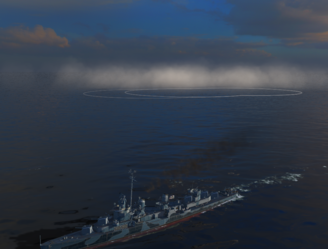 The Fletcher moves out as her smoke screen dissipates.

Most ships with smoke have three (3) base generator charges with a 160 second cooldown, producing puffs of 0.45km radius. Otherwise, the performance of the generators varies by nation. E.g.

A ship sailing peaceably along has a certain detection radius. However, the moment she lights off her main battery, she becomes visible from considerably farther away. This is due to 'gun bloom' — the flame and smoke from her rifles. With clear visibility, the ship's detection range becomes the same as her main gun range.

There is a similar effect when firing in smoke. A ship sitting quietly in smoke is invisible outside 2.0km (barring the use of radar or hydro). When she fires her main batteries, her detection range increases, although not as much as firing in the open.

The amount the ship's detection range increases tends to track the main gun caliber, as does the type of ship. Roughly, the smoke firing detection ranges of DDs varies between 20-25% of the clear firing range, cruisers 35-55%, and BBs 65-100%. Battleships gain little from firing in smoke.

cruisers have a considerable advantage: they have almost no detection range increase when firing in smoke.

Note well that while gun bloom may not cause the ship to become detected, the muzzle flashes and tracers themselves are visible to the enemy from a considerable distance, and may be quite sufficient for accurate counter-fire.

For more information on how the spotting and detection system works in World of Warships, please see the Detection article.

The concealment effect of smoke can be countered by alternate methods of detection: radar, sonar, radio direction finding. And a ship concealed by smoke still can be attacked.

Radar is not hindered by obstructions to LoS; smoke and terrain are no obstacle out to as far as 12 km. See the Surveillance Radar

Usually, radar is used to spot and target ships hiding in smoke. However, radar works both for a ship looking into smoke, and for a ship looking out from smoke. A radar ship illuminating targets from within a smoke screen can fire on her enemies without herself being seen (assuming that they remain outside her detection radius).

The effect of the Hydroacoustic Search

consumable is similar to radar, though with a longer duration and a shorter range. In effect, it increases the assured detection range to 3, 4, 5, or even 6 km.

'Hydro', of course, also has its usual defensive ability to detect the torpedoes coming from that suspicious cloud over there.

The RDF commander skill displays an approximate bearing to the closest enemy. Especially at a relatively close range, RDF can provide enough information for effective torpedo or gun counter-fire.

There is a true saying,   "Smoke screens are torpedo magnets."    Plan accordingly.

Torpedoes are not a counter to concealment; they are a counter to concealed ships. Firing a spread of torpedoes into a smoke screen may have serious consequences for ships inside or behind, often turned broadside to unmask all turrets and thus offering big, fat targets. Even if the fish don't hit, they may force the lurker out into the open.

The captain launching torpedoes should consider how long the smoke screen will last. Torpedoes are much slower than shells and a smart captain hiding in smoke will be gone by the time the screen dissipates.

The general whereabouts of a ship firing its main guns (not secondary or AA guns) in smoke can be observed by its muzzle flashes, even if the ship itself cannot be seen. This can be enough to place shells very near or on the concealed ship. It's a skill worth practicing. Fast-firing ships may simply saturate the area with shells and watch for explosions as they make contact.

The captain hiding in smoke must be aware of the possibility of counter-fire. He can adjust his movement and positioning, or even hold his fire, to make counter fire much less effective.

Ships are longer than they are wide. A common albeit questionable tactic is to steer nose-in, order flank speed, and charge the smoke. Such a ship is positioned to dodge torpedoes and absorb gunfire. Relying on her forward guns, not every ship has the firepower to quickly kill a revealed enemy, so this tactic is discouraged for destroyers. A battleship that pulls it off can simply run over a previously-hidden destroyer. Cruisers don't like to be rammed, either.

There are several ways to deploy smoke, and different ways to use deployed smoke.

A common tactic of destroyers in the opening stages of a battle is to move into a capture point (Cap) and "pop smoke". The enemy already will know that there is a ship in the Cap, though not where it is. This leaves the enemy with a tactical problem: surrender the point, send a ship (usually the lead destroyer) into the Cap to contest it, or find the smoked destroyer and kill it. At this point, the situation usually turns on the positioning of support ships.

Generally, this is considered a questionable use of smoke. The Capping destroyer has blinded herself to threats, and probably blinded supporting ships behind her. In addition, the smoke cloud is a dead giveaway of where the destroyer is located. Better to hold onto the smoke charge until it's truly needed.

A ship may advance to contact, hoping to spot the enemy fleet, then suddenly find herself the subject of way too much attention. She will pop smoke, come hard about, and run for her life. While the smoke may not conceal her directly, it will be between her and most of her enemies, hoping to baffle their gunners long enough to break contact.

With luck, the ships firing at her will themselves be spotted and have new things to worry about.

This is a combination tactic used around a capture point (Cap). A destroyer and cruiser team up to exert pressure into the Cap, or perhaps win it. The destroyer pops smoke at the edge of or even within the Cap, the cruiser enters the smoke and takes up a firing position. The destroyer then leaves her smoke to spot for the cruiser and perhaps knife-fight while the cruiser provides cover.

The success of this tactic is highly dependent on the local terrain.

A smoke screen can obscure a wide area from an enemy at a distance. Particularly at choke points between land masses, the view of an entire section of the map can be hidden so friendly ships maneuver without being seen.

A valuable use of smoke is defensive. If a friendly battleship is under heavy fire, interjecting with a smoke screen may be just the thing to save it and keep those guns firing. Likewise a cruiser that suddenly discovers an uncharted island. Such altruism can save a win and might even be worth a karma point.

A ship pulls into a favorable location, perhaps overlooking an ongoing fight, deploys smoke, and opens fire. This tactic is particularly suitable for ships with fast-firing guns and long-lasting smoke, such as USN destroyers. The difficulty is that the "invisible ship" rarely remain invisible for long. It is recommended that a ship practicing this tactic plan an escape route, such as behind a nearby island.

Pretending to be an island

If the range is long enough, a ship may place a smoke cloud, then sit in the open behind it to lob shells at the enemy, essentially treating the cloud as an island. The virtue of this tactic is that the ship can continue to spot for herself, while remaining obscured from enemy binoculars. And at need she can duck into her cloud for more stealth.

A more common tactic is to set a smoke screen for a more powerful ship to sit behind and shoot while the original setter spots or continues to other tasks.

Retrieved from "http://wiki.wargaming.net/en/index.php?title=Ship:Smoke_Screens&oldid=296441"
Category:
Your location:
To log in, select the region where your account is registered
CIS Europe North America Asia Republic of Korea
Or use Microsoft Login to enter WoT XBOX ecosystem
Log in