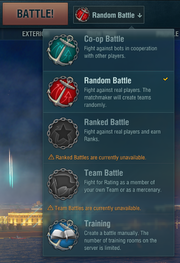 Choose your type of battle!
There are multiple types of battles available in World of Warships. The type of battle is selected by clicking the icon to the right of the "BATTLE!" button at the top of the Port screen.

In a Co-operative Battle, a team of players face off against a team of computer-controlled bots. In cases where there are not enough ships in the queue to facilitate a full game of the correct tier, bots are used to complete the team of human players. Bots are denoted by the colons before and after their names (such as ":Hipper:"). Credit and experience rewards earned in co-operative play are notably lower than those earned in Random Battles.

Unlocked at: Access Level 3
Maximum Number of Players: 24 (12 per team)

Regular achievements can only be earned in Random and Ranked Battles.

There is no minimum number of players in higher-tier[1] Random Battle; it is possible for a game to be created as 1v1, though this is exceptionally rare and usually only occurs for high-tier ships that queue up for a Random Battle during off-peak hours.

Scenarios pit a team of players against increasingly difficult waves of computer-controlled opponents in operations with unique objectives. Players are allowed to queue solo, but are encouraged to gather their friends into a division to attempt scenarios; assembling a full division of 7 players will greatly increase chances of success. The minimum division size is 4 players. Credit and experience rewards are comparable to Random Battles if all objectives are completed, but are significantly less if not all secondary objectives are completed.

Scenarios have their own set of achievements.

Information on the website: Updates to Ranked Battles
Unlocked at: Access Level 16
Number of Players: often 14 (7 per team)

Ranked Battles are only available at specific times and are restricted to certain tiers of ships. A typical "season" of Ranked Battles runs a few weeks, and involves players progressing up a ladder-style ranking system from a high rank (such as "Rank 10") towards a low rank, with Rank 1 being the pinnacle of the ladder. Players queue for Ranked Battles individually and are placed on teams randomly by the matchmaking system, similar to how Random Battle matchmaking is done; however, Ranked Battle matchmaking is grouped such that players are teamed up with — and playing against — players of similar rank. Credit and experience rewards are equivalent to those earned in Random Battles.

Regular achievements can only be earned in Random and Ranked Battles.

Similar to Ranked Battles, Clan Battles are only available at specific times and are restricted to certain tiers of ships. A team is formed from within a single Clan by at least one officer. Players queue for Clan Battles as a team, and are matched up against a team of similar rating that is likewise in the queue. Credit and experience rewards are fixed at 2,500 experience and 300,000

for a loss; Clan Battles also award a +300% Free experience modifier per battle.

Brawls are a battle type with short seasons (a few days) and a smaller team format (for example 3 vs. 3, 1 vs. 1 or 5 vs. 5)—expect the battles to be more dynamic and fast-paced compared to other battle types! Players are matched based on their skill level. You can participate in a Division, and you don't need to be a member of a Clan. The rewards can be, for example, coal, credits, Elite Commander XP and signals.

A Training Room allows players to generate fully custom scenarios on a map of their choice, choosing the duration of the game, the team configurations, and even the exact number of ships on each team. Unbalanced teams are allowed. Many players utilize this functionality to test game mechanics, perfect their aim at certain ships, or to scrimmage other players in organized leagues. Playing games in a Training Mission earns zero credits and experience; however, there is no service or ammunition cost and mounted camouflage or signal flags are not consumed. A Training Mission is economically neutral: players spend nothing to run one and earn nothing in return.

All modes of battle are scored using a points system. Each team starts with a fixed amount of points and gains or loses points for various events, depending on game mode. Battles are on a 20 minute timer, with four possible victory conditions:

If time expires and both teams have an equal number of points, the game is considered a Draw. This is treated as a loss for both teams for the purposes of experience and credit gains.

If the battle ends because the last ships destroy each other by ramming, the team with more points wins. That ramming does not change the points. If the teams have the same number of points, it is a draw.

When no more humans are playing or watching, a co-op battle ends immediately and the team with more points wins.

Example: When you kill an enemy destroyer in a Random Battle, your team gets 30 points and the enemy team loses 45 points. 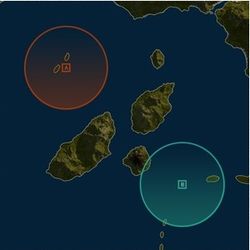 In a Standard Mode battle, each team has a single control area (their base) that starts the game under their control. Each team starts with 300 points. There are 2 control areas, displayed as colored squares with flags in them. Each team will constantly accrue points at the rate of two (2) points every six (6) seconds for maintaining control of their control area. In addition, each team scores points for killing enemy ships — and has points deducted for the death of friendly ships — per the above table.

Sailing into the enemy's control area will immediately prevent them from accruing points from it, as well as beginning the capture of it (unless they also occupy it). Taking damage will cause a ship to lose half of the capture points it has accrued. If an enemy ship enters your control area, the capture indicator will rotate to indicate that the point is being contested. Capture progress for the enemy team is indicated by the point marker border changing from green to red. One ship will fully capture the enemy base in 180 seconds; two or more will do so in 120 seconds. A team that captures the enemy base gets 1000 points and wins the battle. 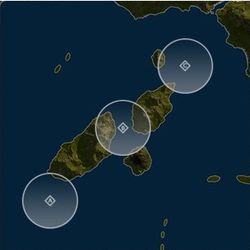 There are 2-4 control areas, displayed as white diamonds with the letters A-D on them. Teams earn control of a capture point by having ships within the designated control area; additional ships within the boundary will increase the speed of capture: one ship within a boundary will capture an area in 60 seconds; two or more will capture an area in 40 seconds. (For Ranked Battles and Clan Battles, these values are lower.) Capture progress is halted at its present level in the capture area if ships from both teams are present. Once captured, each capture area gives points to the team that owns it on a regular interval per the table below, unless an enemy ship is in that capture area.

Sailing into an enemy's control area will immediately prevent them from accruing points from it, as well as beginning the capture of it (unless they also occupy it). Taking damage will cause a ship to lose half of the capture points it has accrued. If an enemy ship enters a control area that is controlled by the enemy, the capture indicator will rotate to indicate that the point is being contested. Capture progress for the enemy team is indicated by the point marker border changing from green to red.

In addition, teams score points for killing enemy ships — and have points deducted for the death of friendly ships — per the above table.

Information on the website: Arms Race Hits Random and Co-op Battles in Update 0.11.4

Update 0.11.4 made Arms Race battle mode available in Random and Co-op battles on eight maps, but only in battles where the highest ship tier is IX, X or ★. It is also available in Training battles on all tiers.

Epicenter mode was disabled in Update 0.11.4 but is still available in Training battles. 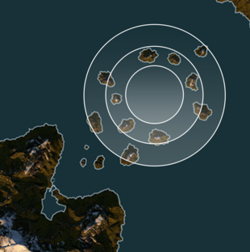 Each team starts with 450 points. A circular area and two ringlike areas around it are located on the map.

Capturing an area brings 5 points and lowers the enemy team's points like that:

In addition, each team scores points for killing enemy ships — and has points deducted for the death of friendly ships — per the above table.

Sailing into an enemy's area will immediately prevent them from accruing points from it, as well as beginning the capture of it (unless they also occupy it). Taking damage will cause a ship to lose half of the capture points it has accrued. Capture progress for the enemy team is indicated by the point marker border changing from green to red.

The Introductory Mission is only available to new players. It introduces the basics of gunnery, maneuvering, capturing control areas, and achieving objectives. It can be played as frequently as desired, up until a player has completed 10 battles of any type.

Available during Update 0.7.3, Space Battles offer captains a unique way to experience World of Warships: in the vast depths of space! The mode offers nine uniquely-skinned Tier X ships to choose from, each with an even more unique captain. Economic rewards, however, are equivalent to Tier VII matches, and the only achievements that can be earned are achievements unique to the mode.

In order to balance the participation of ships of disparate tiers, admission is by expending Battle Tokens

Retrieved from "http://wiki.wargaming.net/en/index.php?title=Ship:Game_Modes&oldid=319546"
Categories:
Your location:
To log in, select the region where your account is registered
CIS Europe North America Asia
Or use Microsoft Login to enter WoT XBOX ecosystem
Log in