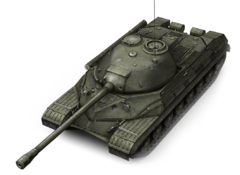 3531000
Development started in 1949. The vehicle entered service in 1953 under the designation T-10. Subsequent development yielded several modifications of the tank, the most mass-produced being the T-10M. Approximately 2,500 vehicles were produced.

The IS-8 is a Soviet tier 9 heavy tank

The IS-8 is a departure from its "parent", the IS-3, as instead of being a hands-on assault tank, the IS-8 is a "softer" but faster heavy tank, comparable to the IS. It drives more like a "super medium" than a heavy. The front armor is slightly increased in thickness compared to IS-3, but it is far less effective in the front due to the worsened angles and increased height of the tank, and the side and rear armor are decreased. The turret is very hard to penetrate and the center of the front hull is capable of bouncing shots from the direct front, but shots from other tier 9s will often go straight through. The top gun, however, has enough penetration to easily take on other tier 9 and 10 heavy tanks, and does a lot of damage with a quicker reload than the IS-3's BL-9 gun. Using the IS-8's speed to avoid damage and pick on other heavies makes this tank an extremely formidable opponent.

The 122mm BL-9 gun carry over from the IS-3 so immediately load it. The 122mm M62-T2 gun is the most important upgrade, but it is necessary to upgrade the suspension to the T-10M suspension before the gun can be mounted. Afterwards, research the V-12-6 engine to give the IS-8 its mobility, and then the T-10M turret.

The T-10 (also known as Object 730) was a Soviet heavy tank of the Cold War, the final development of the KV and IS tank series. It was accepted into production in 1952 as the IS-8 (Iosif Stalin, Russian form of Joseph Stalin), but due to the political climate in the wake of Stalin's death in 1953, it was renamed T-10.

The biggest differences from its direct ancestor, the IS-3, were a longer hull, seven pairs of road wheels instead of six, a larger turret mounting a new gun with fume extractor, an improved diesel engine, and increased armor. General performance was similar, although the T-10 could carry more ammunition. T-10s (like the IS tanks they replaced) were deployed in independent tank regiments belonging to armies, and independent tank battalions belonging to divisions. These independent tank units could be attached to mechanized units, to support infantry operations and perform breakthroughs.

The mobile nature of armored warfare in World War II had demonstrated the drawbacks of the slow heavy tanks. In the final push towards Berlin, mechanized divisions had become widely split up as heavy tanks lagged behind the mobile T-34s. The Soviets continued to produce heavy tanks for a few years as part of the Cold War arms race (compare the heavier U.S. M103 and British Conqueror), but the more flexible T-54 and T-62 medium tanks already had armor and armament comparable to the T-10's. In the 1960s, the Soviets embraced the main battle tank (MBT) concept, by replacing heavy tanks with mobile medium tanks. In the late 1960s, the independent tank battalions with heavy tanks were re-equipped with the higher-technology T-64s, and later, the very fast T-80, while regular tank and mechanized units fielded the more basic T-55s and T-72s. T-10 production was stopped in 1966, and heavy tank projects were cancelled, such as the auto-loaded, 130 mm-armed Object 770. Antitank guided missiles (ATGMs) started to be deployed widely during this period, and would become an effective replacement for the heavy tanks' long-range firepower. The Soviets made use of them first on BMP-1 infantry fighting vehicles, and later on the T-64 and other MBTs. Eventually, light, sophisticated reactive armour was used to give the MBTs a further edge in protection without slowing them down. According to Bryan Perret, "the engagements of the Six-Day War, especially that at Rafah, merely emphasised what the Soviet Army already knew, namely that the heavy tank had had its day".

The T-10 served with the Soviet Union but was not known to have been provided to Warsaw Pact nations, though Soviet heavy tank regiments stationed in those countries may have been equipped with them. T-10Ms were "in the unhappy position" of simultaneous production by two factories (Kirov as Object 272 and Chelyabinsk as Object 734) "with incompatible parts".[2] Not until 1962 was Kirov's version standardized upon.[3] The T-10 is known to have been exported to Egypt and Syria.[4] It was used in combat during the Yom Kippur War, where it normally provided long-range fire support to the T-55/T-62 tanks, with little success.[5] Heavy tanks were withdrawn from Soviet front-line service by 1967, and completely removed from service in 1993. Many of the tank chassis were converted to missile vehicles. It is estimated that some 6,000 Soviet heavy tanks were built after the end of WWII, including IS-2s, IS-3s, and T-10s.

Retrieved from "http://wiki.wargaming.net/en/index.php?title=Blitz:IS8&oldid=228403"
Categories:
Your location:
To log in, select the region where your account is registered
CIS Europe North America Asia
Or use Microsoft Login to enter WoT XBOX ecosystem
Log in