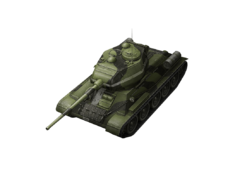 A special premium version of the T-34-85 made available for a limited time as part of the Victory Day special event. This tank is so far one of the only four tanks in Blitz (Pre patch 2.5) to possess any type of camo or design (The others being the E 25 "#1", Snowstorm Jagdtiger 8,8 and the T34 1776). This tank features a slightly faster ROF compared to the T-34-85, at the expense of less accuracy. Generally considered a quick and versatile tank that is easy to play.

Preforms well in most situations, very adaptable like its standard variant. Can preform well as a scout or support tank, whenever needed. Though its gun is slightly underwhelming, it is dependable. Like the regular tank, the special lacks any sort of armor, this should be taken into account. If you want to earn massive credits for a lower tier tank, this is the tank for you.

A T-34-85 modified for the Victory Day event. Otherwise the same.
click to read more...

Retrieved from "http://wiki.wargaming.net/en/index.php?title=Blitz:T-34-85_Victory&oldid=250153"
Categories:
Your location:
To log in, select the region where your account is registered
CIS Europe North America Asia Republic of Korea
Or use Microsoft Login to enter WoT XBOX ecosystem
Log in