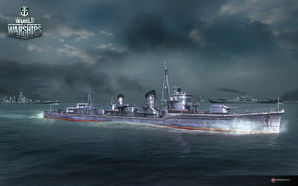 Due to a good balance of her main characteristics, Kagero was the most successful destroyer design in the Imperial Japanese Navy. She had extremely long-range, high-speed, oxygen-fueled torpedoes that made her considerably superior to all ships of her type in terms of torpedo armament power.

Kagerō is the Tier VIII entry on the IJN "torpedo boat" branch. Captains who have moved up from Akatsuki will find Kagerō familiar in many ways. Both should be accustomed to the A-X-Y turret arrangement of the main battery, her handling characteristics are nearly identical (similar turning circle radius and rudder shift time), and her anti-aircraft suite is still hardly worth mentioning. So, what's new?

For starters, Kagerō’s guns reload a little faster, though they do give up some range. This gives her more of a fighting chance when cornered by an enemy gunboat destroyer (such as Benson), especially if said enemy is already wounded. With that said, however, captains who have progressed this far up the line should know by now when to hang in a gun duel against an enemy destroyer and when discretion is the better part of valor — never court a gunfight with an American or Russian destroyer with lots of health. Kagerō’s detection radius is improved over Akatsuki; not only is her base detection radius of 6.84 km the lowest of all high-tier Japanese destroyers, she can equip Concealment System Modification 1

Kagerō has some fairly glaring deficiencies compared to her counterparts at Tier VIII, though. Her speed is fairly pedestrian, her anti-aircraft guns are ineffective at shooting down enemy planes, and her main battery reload and turret traverse times are painfully slow. Unlike Akatsuki, she has two quad torpedo launchers, foregoing the tactical flexibility of three triple torpedo launchers. As nasty as her upgraded F3 torpedoes are — and they hit very, very hard — their reload time means that getting off more than a few salvos in a match is tough. Luckily, Kagerō can give up Smoke Generator

in exchange for Torpedo Reload Booster

. This allows her to force an 8-second reload time on her torpedoes once every four minutes. Given her best-in-tier detection radius, this will be a worthwhile gamble for many captains.

The Japanese destroyer line becomes challenging to excel in at high tiers, but Kagero provides all the tools necessary for captains to do just that; they need only bring patience and a willingness to learn how to handle her.

Availability of researchable upgrades for Kagerō is as follows:

Captains going for a hybrid build might prefer the Gun Fire Control System module earlier. Captain's pick for this one, there's not really a wrong answer.

The recommended upgrades for Kagerō are as follows:

help her weak artillery if a hybrid build is desired.

Concentrate on survivability, sneak, and torpedo performance. 'Grease the Gears' may prove useful, especially if you have an extra point to spend.

Kagerō can equip the following consumables:

and a downgraded version of the Torpedo Reload Booster

Considering that Kagero is a standard Japanese torpedo ship captains should focus on flags that increase her ability to cause damage over time and improve her torpedoes. It should also be noted that as a tech tree ship it is up to the captains discretion when running economic flags. While there is benefit to doing so it is not going to garner the same as a premium ship. 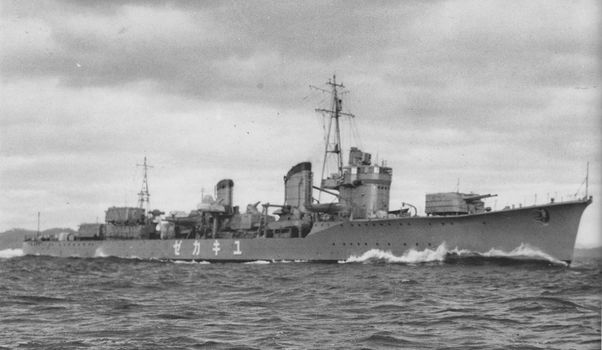 Ships of Japan
Destroyers
Retrieved from "http://wiki.wargaming.net/en/index.php?title=Ship:Kagero&oldid=319141"
Categories:
Your location:
To log in, select the region where your account is registered
CIS Europe North America Asia
Or use Microsoft Login to enter WoT XBOX ecosystem
Log in