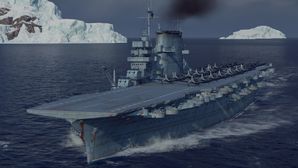 When commissioned, Lexington was one of the largest aircraft carriers in existence. She was converted from an unfinished battlecruiser. The ship had good armor and advanced torpedo protection. Owing to her dimensions, the aircraft carrier was equipped with a very spacious hangar and was armed with numerous AA and dual-purpose artillery. The ship's powerful propulsion created very high speeds.

Overall, Lexington is a strong Tier VIII aircraft carrier. She is fast — 33.6 knots — but she turns like a brick, and her huge size advertises her presence for miles around. Although she has a strong wing of aircraft, careful usage of her bomber aircraft is vital as the anti-aircraft power of most Tier VIII ships and above that she will encounter begins to be very competitive. The higher health pool of its planes will help immensely in survival and in attack potential. The CV itself has a large detection radius of 14.5k, so careful positioning behind islands and such is vital in survival.

You have two choices in upgrading your attack planes: the HVAR 127mm rockets or the Tiny Tims. The HVARs have an HE pen of 32mm but launches the payloads more densely, making it easier to hit DDs even when mis-targeted. They are somewhat less effective in attacking targets with a thick deck armour due to lack of penetration(ex. Izumo, GK, etc; useful for Republique, Alsace, most cruisers) and don't deal as much damage(max 2000). Then they have the Tiny Tim. Tiny Tims are heavy rockets that hit hard (68mm of pen) but only 6 rockets are launched. You'll have to aim carefully in order to be successful in hitting dds with these rockets. It is best advised to use these against larger targets due to the innacuracy of the TTs. But if you are able to hit dds with these, it will reward you greatly.

American torp planes aren't as good as IJN ones as they lack speed (35kts) and range (3.9k). However, they are able to deal more damage when all of them hit. They have a good amount of hp, which allows you to drop your payload at a closer distance. When you upgrade to SB2C Helldivers, they drop 3 torps instead of 2: giving you more chances in succeeding the drop. Closing the distance when attacking is recommended to maximize the damage and flood chance.

They are effective against all BBs and cruisers as you can use HE bombs to cause multiple fires. They're not recommended to be used against DDs as they are not very accurate (unless the target is on low hp). Of course these being bombers, beware of going into a cluster of enemy ships if you fancy dropping your payload nearby them. Upgrading to the SB2C Helldiver will increase your attacking flight from 2 to 3 and bombs you to drop 1 extra bomb per payload(amounting to 6 bombs dropped at a time).

Interestingly — perhaps in a nod to her battlecruiser origins — Lexington has a greater amount of armor than would be expected of a carrier, even retaining almost a proper armor belt. Captains should be advised, though, that while her armor may bounce the odd destroyer shell, it also means cruiser and battleship armor-piercing rounds have a greater chance of causing full penetration or citadel damage that would otherwise overpenetrate on softer targets. Her speed is pretty decent at 33 knots meaning that repositioning is easier when needed. Although care must be used when moving the ship because her rudder is slow and she is very easy to hit because she turns like a brick slowly but overall Lexington can be deadly when handled correctly.

The recommended upgrades for Lexington are as follows:

, which stacks with Concealment Expert and Camouflage to bring Lexington`s surface detection down to a decent range of 11.8km. However, you would want Flight Control Modification 1

As a carrier, Lexington has no risk of detonating. As such, the signal (

The Lexington-class aircraft carriers were a pair of aircraft carriers built for the United States Navy (USN) during the 1920s. The ships were built on hulls originally laid down as battlecruisers after World War I, but under the Washington Naval Treaty of 1922, all U.S. battleship and battlecruiser construction was cancelled. The Treaty, however, allowed two of the unfinished ships to be converted to carriers. They were the first operational aircraft carriers in the USN and were used to develop carrier aviation tactics and procedures before World War II in a series of annual exercises.

They proved extremely successful as carriers and experience with the Lexington class convinced the Navy of the value of large carriers. They were the largest aircraft carriers in the USN until the Midway-class aircraft carriers were completed beginning in 1945. The ships served in World War II, seeing action in many battles. Although Lexington was sunk in the first carrier battle in history (the Battle of the Coral Sea) in 1942, Saratoga served throughout the war — despite being torpedoed twice — notably participating in the Battle of the Eastern Solomons in mid-1942 where her aircraft sank the Japanese light carrier Ryujo. She supported Allied operations in the Indian Ocean and South West Pacific Areas until she became a training ship at the end of 1943. Saratoga returned to combat to protect American forces during the Battle of Iwo Jima in early 1945, but was badly damaged by kamikazes. The continued growth in the size and weight of carrier aircraft made her obsolete by the end of the war. In mid-1946, the ship was sunk during nuclear weapon tests in Operation Crossroads.

Ships of U.S.A.
Aircraft Carriers
Retrieved from "http://wiki.wargaming.net/en/index.php?title=Ship:Lexington&oldid=321996"
Categories:
Your location:
To log in, select the region where your account is registered
CIS Europe North America Asia
Or use Microsoft Login to enter WoT XBOX ecosystem
Log in