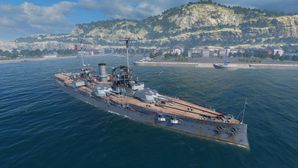 The lead ship in the first series of dreadnoughts of the Imperial German Navy. This battleship was notable for reliable armor, good torpedo protection, and a powerful secondary battery. He carried 283 mm guns that were not inferior in many aspects to larger-caliber gun systems adopted by other navies of the world.

Nassau is the first ship in the German battleship line. He is similar to Kawachi in turret layout, but has smaller, faster-firing guns. Despite having the smallest caliber guns at Tier III, Nassau can still inflict good damage with this faster rate of fire.

The accuracy on this ship, on the other hand, is noted by players as "hilarious" and very much like Kawachi. Most of the fired shots will tend to miss the target.

Her secondary guns are beyond excellent for its tier, and can provide good protection against enemy destroyers who attempt to get close to the Nassau.

One must be aware also, that this ship has very poor detection range. Most ships you will encounter can shoot at you even before you see them.

The recommended upgrades for Nassau are as follows:

Nassau can equip the following consumables:

SMS Nassau was the first dreadnought battleship built for the Imperial German Navy, a response to the launching of the British battleship HMS Dreadnought. Nassau was laid down on 22 July 1907 at the Kaiserliche Werft in Wilhelmshaven, and launched less than a year later on 7 March 1908, approximately 25 months after Dreadnought was launched. He was the lead ship of her class of four battleships, which included Posen, Rheinland, and Westfalen.

Nassau saw service in the North Sea in the beginning of World War I, in the II Division of the I Battle Squadron of the German High Seas Fleet. In August 1915, he entered the Baltic Sea and participated in the Battle of the Gulf of Riga, where he engaged the Russian battleship Slava. Following her return to the North Sea, Nassau and her sister ships took part in the Battle of Jutland on 31 May – 1 June 1916. During the battle, Nassau collided with the British destroyer HMS Spitfire. Nassau suffered a total of 11 killed and 16 injured during the engagement.

After World War I, the bulk of the High Seas Fleet was interned in Scapa Flow. As they were the oldest German dreadnoughts, the Nassau-class ships were for the time permitted to remain in German ports. After the German fleet was scuttled, Nassau and her three sisters were surrendered to the victorious powers as replacements for the sunken ships. Nassau was ceded to Japan in April 1920. With no use for the ship, Japan sold her to a British wrecking firm which then scrapped her in Dordrecht, Netherlands.

Ships of Germany
Battleships
Retrieved from "http://wiki.wargaming.net/en/index.php?title=Ship:Nassau&oldid=318678"
Categories:
Your location:
To log in, select the region where your account is registered
CIS Europe North America Asia
Or use Microsoft Login to enter WoT XBOX ecosystem
Log in