2700000
The Long Tom and its successor, the M43, became the most powerful Allied artillery. The M40 fought in the battle for Cologne in 1945. Both vehicles were used during the Korean War. 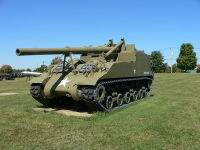 Retrieved from "http://wiki.wargaming.net/en/index.php?title=XBOX:M40M43&oldid=214778"
Categories:
Your location:
To log in, select the region where your account is registered
CIS Europe North America Asia
Or use Microsoft Login to enter WoT XBOX ecosystem
Log in