0
Developed in early 1926 as an all-metal version of the Gamecock fighter. Never entered service. 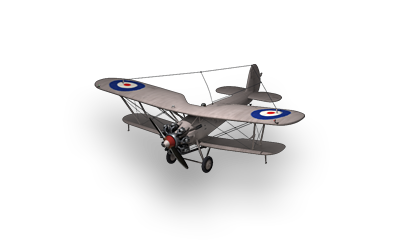 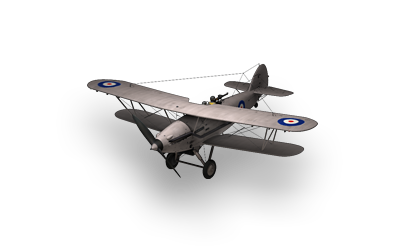 This plane is one of the better tier 1's. Its abundance of health paired with great guns make it a deadly combo. It's speed can hamper it some but is overcomable. Sort of a good example for the rest of British fighters. Head ons are a good idea and so are boom and zoom tactics.

In January 1926 the Air Ministry funded Gloster Aircraft to produce an all-metal version of their Gamecock for a high altitude fighter role, hence requiring a supercharged engine. The result was the Goldfinch, a single bay biplane with unequal span wings of marked stagger. Unsurprisingly, this aircraft had a strong similarity to the Gamecock and in particular to the Gamecock II with its narrow chord ailerons. Because of the supercharged engine the fuselage was longer forward of the cockpit. The tail also was a little different, the tailplane having rounded trailing tips and the fin, initially at least, was very broad in chord and short in height.

Only one Goldfinch was built but there were two rather different versions. The first build had all-metal wings but a fuselage of mixed metal and wood construction. Both wings and fuselage were fabric covered. The fuselage was then rebuilt entirely of metal, apart from its covering and lengthened. The rebuild also brought a revised fin and rudder, with a narrower, higher fin of simpler overall shape. Throughout, the Goldfinch was powered by a supercharged 450 hp (335 kW) Bristol Jupiter VIIF driving a 9 ft (2.74 m) two bladed fixed pitch propeller.

The Goldfinch first flew in May 1927, and in December it went to RAF Martlesham Heath for trials where it proved fast and high with a rapid climb rate, and generally good manoeverability, although spinning behaviour was substandard. Gloster's submitted it as a contender for Air Ministry specification F.9/26 for an all-metal day-and-night fighter, but it failed to meet the required load and fuel requirements and was eliminated quite early. The Bristol Bulldog was the eventual winner, with the Goldfinch being used for trials at Martlesham Heath until October 1928.
click to read more...

Retrieved from "http://wiki.wargaming.net/en/index.php?title=Plane:Goldfinch&oldid=279898"
Your location:
To log in, select the region where your account is registered
CIS Europe North America Asia Republic of Korea
Or use Microsoft Login to enter WoT XBOX ecosystem
Log in