340000
A further development of the P-43 Lancer featuring a more powerful Pratt & Whitney R-2180 engine. Development was discontinued due to the decision of the Republic Aviation Corporation to focus on building a more promising P-47 fighter. 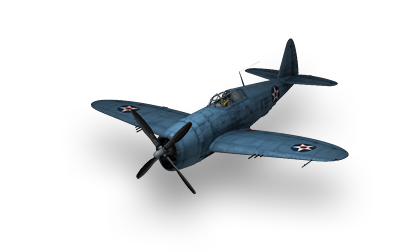 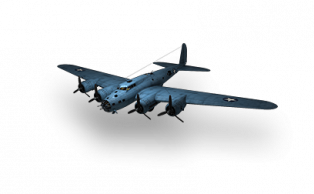 The XP-44 Rocket is an American tier V multirole. In comparison to the F4F Wildcat, it shares similar traits. It has the same armament, with six .50mg's once upgraded. It's main strength is the massive health pool available. The XP-44 has even more health than the already healthy F4F. Use this to your advantage when fighting. You can survive multiple fights and wait for more maneuverable fighters to come help. Its speed is another strong point, only 9 KPH slower than the really fast FW 190. Use this speed to catch enemies or run away. Coupled with the high altitude performance it possesses, chasing after fighters is a good strategy. Its downsides are its guns and maneuverability. The six .50 MG's have a good fire rate but do not have the punch of the 20mm cannons. They do not overheat easily, so sustained fire is a good strategy. This is the heaviest Multirole at tier V, so it is expected to be a bit sluggish. Being outmaneuvered at low altitudes can be frustrating. Use your 500lb bombs to take out enemy AA and other installations, these have a forgiving reload time and allows you to make multiple bombing runs on any given area. Use your speed to close in on enemies and open fire with your guns. Stock grind can be a pain but once you get past it, this plane becomes decent enjoyable. Overall the XP-44 is a fast, durable, and hard-hitting multirole suited for precision bombing or shredding other planes with its arsenal of machine guns. When played correctly, this plane is a good way to train for the next planes in the tech tree: the P-47's.

USA
ja:Plane:P-44
Retrieved from "http://wiki.wargaming.net/en/index.php?title=Plane:P-44&oldid=290299"
Categories:
Your location:
To log in, select the region where your account is registered
CIS Europe North America Asia Republic of Korea
Or use Microsoft Login to enter WoT XBOX ecosystem
Log in