905000
Developed on request of the U.S. Army Air Corps after the production of the Р-43 Lancer and P-44 Rocket was discontinued. First flew in May 1941. A total of 171 P-47Bs were built and used for conducting flight trials and training of pilots. 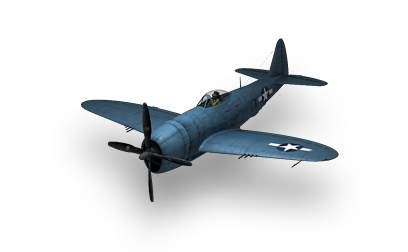 The first of the P-47 Thunderbolts, the P-47B holds a reputation for being incredibly tough, surprisingly fast, and armed to the teeth. The P-47B can carry eight .50 caliber Brownings, giving it a tremendous volume of fire at close range. For ground targets it can bring both six 4.5 inch rockets and two 500lb bombs for flattening targets of opportunity. The P-47B is a true heavyweight with a powerful 2300hp engine and 380 hitpoints, giving it good survivability under fire and the speed to zoom in and out of combat. It also boasts a whopping 20-second boost and retains the good altitude performance of most American planes at 1500m, for good reason. The biggest downside (and one you must always pay attention to) is the atrocious maneuverability. The P-47B turns slowly and climbs poorly; tight encounters with fighters and some multiroles mean certain death unless you keep enough boost time to zoom away. Play smart and plan your attack routine, whether dropping your ground ordnance first before going after aerial targets or vice versa. By necessity most of your aerial kills will be cumbersome planes like bombers or GAs, while fighters and multiroles should only be engaged with backup or when they're mangled enough to guarantee a kill. Your eight Browning machineguns will get the job done almost as good as autocannons, without the overheating problem. Overall the P-47B is a solid multirole that excels in pummeling ground targets or aircraft, while being fast enough to get away with it.

USA
ja:Plane:P-47b
Retrieved from "http://wiki.wargaming.net/en/index.php?title=Plane:P-47b&oldid=289841"
Categories:
Your location:
To log in, select the region where your account is registered
CIS Europe North America Asia Republic of Korea
Or use Microsoft Login to enter WoT XBOX ecosystem
Log in