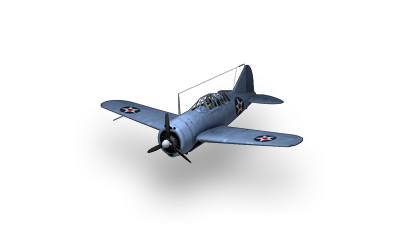 This plane is very similar to its parent, the F2F. The transition between the two is a easy one. Most of its characteristics remain the same, though it is slightly faster and has a noticeably higher service ceiling. On top of that, it can carry two 100 lb bombs to take out ground targets. After mounting the bigger 12.7mm machine guns, you will notice a more satisfying punch. But its overall damage is less than the Hawk 75, the tier three american army plane.

There are a few options on where to go first: getting the top guns first will noticeably improve the F3F's firepower, while going for the top engine first will give the F3F better airspeed and acceleration. Either path is doable.

Retrieved from "http://wiki.wargaming.net/en/index.php?title=Plane:F3f&oldid=272317"
Category:
Your location:
To log in, select the region where your account is registered
CIS Europe North America Asia Republic of Korea
Or use Microsoft Login to enter WoT XBOX ecosystem
Log in