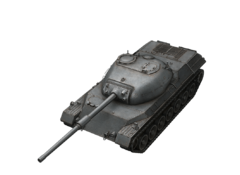 3450000
Prototype developed from 1960 through 1961 as a medium tank for the Bundeswehr, with a total of 26 prototypes manufactured. The prototypes were tested up to 1963. The vehicle was the predecessor of the Leopard medium tank.

The Leopard PTA is typically regarded as one of the toughest tanks in the game to play and master, due to the fact that it has essentially no armour and a very poor potential damage per minute compared to other Tier IX mediums. The Leopard PTA is perhaps best compared to Light tanks, rather than falling into the Medium tank category due to its maneuverability and complete lack of armour protection. With its speed allowing it to re-position quickly, and it's highly accurate low aim time high penetration gun with a devastating alpha damage of 350, the PTA is best played as a mobile sniper and support tank. The play-style necessary to do well in the PTA is a pre-cursor to the gameplay of the Leopard I.

Due to the tanks extremely poor armour and low rate of fire, it is recommended that the PTA never be engaged in 1 v 1 brawls with enemy medium tanks at any tier. The Leopard PTA leads to the Leopard I.

The Leopard PTA has a unique play-style, similar to that of a light tank. Its lack of armor makes it a very poor brawler, and it is vulnerable to any tank it will face, including tier VIIs. This lack of armor coupled with the fairly poor DPM means the PTA should avoid one on one situations with any medium tank. The PTA is best suited to more of a harassment role, zipping in behind enemy TDs or heavies, popping a quick round into their rear, then rapidly relocating to set up another shot. The PTA can also be played as a sniper, utilizing bushes and long range lines of sight to damage unsuspecting enemies. Players should make sure to be constantly aware of their surroundings, keeping track of which enemy tanks have already fired and are reloading, and potential threats from all directions, as the PTA seems to be a constant target.

When playing the PTA, always analyze the situation. Make sure that an escape route is always available so that if one is in a tight situation, they can easily get out. This tank is not suited for frontline duty. Always stay behind several teammates; ignore any comments other players may make about one's decisions in the PTA: you control the tank.

The PTA's poor gun depression hinders its abilities to utilize hills and ridges. Be sure to act as if you have been spotted, as Sixth Sense activates a full 3 seconds after you have already been spotted.

The Leopard PTA can be researched two ways:

Retrieved from "http://wiki.wargaming.net/en/index.php?title=Blitz:Pro_Ag_A&oldid=234336"
Categories:
Your location:
To log in, select the region where your account is registered
CIS Europe North America Asia Republic of Korea
Or use Microsoft Login to enter WoT XBOX ecosystem
Log in