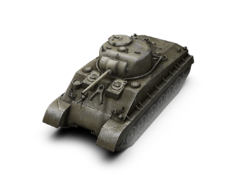 2350
Work on this experimental vehicle started in March 1943. Two prototypes were built by July. The vehicle passed trials, but was never mass-produced or used in action.

This tank was awarded to players who participated in Beta testing. It is essentially a heavier variant of the M4 Sherman. It sports decent mobility and a relatively acceptable gun for its tier, which has no problems penetrating light and most medium tanks but will struggle to penetrate heavy tanks. It also has straight-angled hull armor instead more rounded hull that the M4 Sherman has, resulting in more effective frontal armor.

The performance of this tank is comparable to the T14, though the T14 has better all round armor at the cost of reduced mobility. Like other premium vehicles, the M4A2E4 is a good moneymaker and a pleasure to drive, unless assigned in high tier battles where the lack of penetration of its gun becomes obvious, and it often is. Unless it's in the top tier, this tank is most effective when supporting other tanks.

M4A2E4 tank was part of experiments made with different types of suspensions which led to the adoption of the HVSS suspension system on Sherman family of tanks. Two M4A2E4 prototypes were built in the summer of 1943. Performance of the independent torsion bar suspension was considered unsatisfactory due to severe maintenance problems which lead to the cancellation of the development.
click to read more...

Retrieved from "http://wiki.wargaming.net/en/index.php?title=Blitz:M4A2E4&oldid=245940"
Categories:
Your location:
To log in, select the region where your account is registered
CIS Europe North America Asia
Or use Microsoft Login to enter WoT XBOX ecosystem
Log in