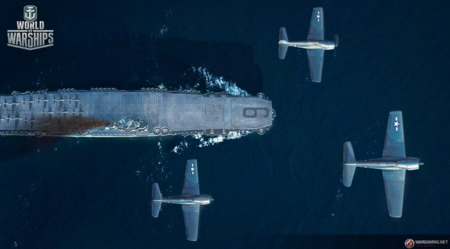 Attack Aircraft — a type of aircraft that is armed with unguided rockets. These aerial weapons are very effective against lightly armored targets and are fairly easy to aim. Some of these rockets can cause fires.

This type of aircraft is usually based on fighters so has a high speed and can reach the desired point in a short time. They are most effective against lightly armored targets.

There are two types of ammunition available — rockets with high-explosive (HE) warheads and rockets with armor-piercing (AP) warheads.

AP rockets are capable of inflicting high damage to the enemy ship, including to the citadel. However, they can ricochet or fail to pierce armor at the acute angle. When hitting thin, e.g. destroyer, armor at right angles they mostly achieve over-penetrations and get only 1/10 of the maximum damage. 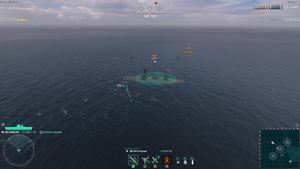 There are two types of HE rockets available. They vary in damage as follows:

HE rockets can cause fires. The fire chance can be increased by:

The attack aircraft sight looks like an ellipse or circle with special marks showing the spread at maximum convergence. The ellipse reduction to the ideal radius occurs in case the aircraft are not making sharp maneuvers.

You can launch rockets as soon as the sight color swap to green, but for maximum efficiency it`s better to reach the ideal radius.

Retrieved from "http://wiki.wargaming.net/en/index.php?title=Ship:Attack_Aircraft&oldid=308748"
Category:
Your location:
To log in, select the region where your account is registered
CIS Europe North America Asia Republic of Korea
Or use Microsoft Login to enter WoT XBOX ecosystem
Log in