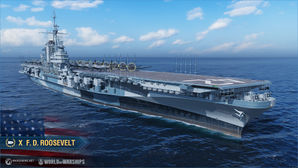 A Midway-class aircraft carrier. The vast scale of the ships of this class allowed them to be equipped with powerful AA defenses, excellent anti-torpedo protection, and reliable flight deck armor.

Franklin D. Roosevelt was first released for sale on 1 October 2020.

The Franklin D. Roosevelt is a rather polarizing ship. On the one hand, it hits very hard under ideal circumstances. Combined with the large health pool of its planes (which is actually larger than many of the ships it will face), it is very easy for players to feel this ship is overpowered when being dropped on. On the other hand, the planes are very slow, and a Stalingrad with Defensive AA Fire

activated will destroy the entire squadron with a single flak barrage, leading to very frustrating moments when playing this ship. Doing well while playing the FDR is a combination of having circumstances in your favour and the skill to capitalize.

The FDR is a Midway class aircraft carrier, sharing the exact same hull characteristics as her tech-tree counterpart. What sets her apart from the Midway (and frankly all other carriers) are her planes. All of her player-controlled aircraft have incredibly large health pools which allow them to absorb an incredible amount of damage. Simultaneously, they are the slowest of any of the tier X carrier planes, making them slow to respond to events on the map. This greatly hinders its ability to reattack the same ship with another squadron of aircraft, and sending aircraft to attack an enemy ship on the opposite side of the map takes a painful amount of time. It also forces the aircraft to stay in the AA bubble of enemy ships for a longer period of time when ingressing and egressing from a target. This is only further compounded by the fact that her aircraft have around 20 seconds between attack runs. The player can either stay in the AA bubble for the duration of the cooldown period and weather the storm of damage, which is not practical when there are multiple ships pooling their AA damage together. Alternatively, the player can attempt to fly out of the AA bubble and then reenter, which takes up the entirety of the cool-down period, but also requires flying through the long-range flak barrage twice. Ideally, the player can use tall islands to shield the aircraft from further AA damage after conducting an attack before returning.

Flak is the bane of the FDR. While the aircraft has the squadron size and health pools to absorb the continuous AA damage of most ships when they are isolated, flak can very quickly chew through her squadrons. This is particularly true of ships with strong AA such as Worcester, Minotaur, Halland, and Stalingrad, especially if they have access to the DFAA consumable that boosts flak damage. Losing planes in this ship is very painful when it happens because of the two-minute respawn time per aircraft. Additionally, the slow speed of the aircraft results in them eating flak bursts more often than with other carrier planes. The player should also attempt to steer their aircraft out of enemy AA before recalling them, as the slow ascent of the aircraft often results in the entire squadron being shot down from flak before reaching the high altitude immunity zone. A successful FDR player must carefully plan their attack run so as to minimize exposure to the long-range flak on the way to the target and after completing the attack as the ship lacks the ability to blow through the flak barrage range like the Manfred von Richthofen can. Playing recklessly can very easily deplane an FDR, rendering it useless to the team.

The torpedo bombers drop eight torpedoes per attack, and although they do very little damage individually, the large number of them dropped results in the highest torpedo damage output per drop of any carrier in the game. The torpedoes have the characteristic long arming distance, slow speed, and wide dispersion that Midway players will be familiar with, but the dispersion handling is unique to this ship. Unlike the Midway which cannot afford to turn very much after beginning the attack run without a ridiculous increase to the torpedo drop dispersion, the FDR has a very low dispersion penalty when turning. This allows her to begin the attack at unexpected angles, such as parallel to the targeted ship, turning 90 degrees at the last second to drop the torpedoes against the enemy's broadside. Unlike the Midway torpedo bombers which must start the attack run in more or less the same direction as when she drops her torpedoes (rendering them weak against agile battleships and cruisers), the FDR has a lot more leeway the optimal set up for a torpedo attack. These torpedo bombers lack a heal, so it's ill-advised to charge straight into enemy ships with DFAA activated if it requires flying through their entire AA bubble. Plan your attacks to minimize exposure to AA, and focus stationary or slow-moving targets, particularly "force multipliers" like radar cruisers sitting behind an island. The 35kts (without modification of captain skills) torpedoes will struggle to hit destroyers and getting full torpedo salvos to impact the target is inconsistent at best compared to the other carriers, so they still have extreme weaknesses.

The dive bombers will drop 8 HE bombs (the same as those found on the Midway) using "Royal Navy style" carpet bombing. This is both a blessing and a curse. On the one hand, the high cruising altitude allows the bombers to more easily see ships hugging islands, which are your preferred targets. Additionally, you begin the attack from further out, reducing time spent in the AA bubble before dropping your bombs; keep in mind dive bombers have a damage immunity period after dropping, which further aids in damage reduction for your dive bombers. On the other hand, the delay between dropping the bombs and the bombs impacting the target makes them less useful when dealing with destroyers or maneuverable ships. The drop zone being far out in front of the aircraft prevents last-minute turns to realign the drop reticle with a target that is turning. Additionally, they are harder to mask with islands from AA. However, if you are successful with your bomb drop, you have the highest HE damage output of any carrier in the game, and the 67mm penetration of your bombs will go through the decks of any non-carrier in the game, and can even penetrate the armoured decks of German carriers and a large section of Royal Navy carrier decks. Their 60% fire chance also makes them a DoT menace. Lone battleships with large decks like the Kremlin and Yamato need to be wary of being whittled down very quickly. That said because HE and fire damage can be largely healed unlike citadel damage and a citadel hit from a Hakuryu or Manfred von Richthofen still deals more damage per bomb than the FDR, she is often as not as proficient at dislodging specific targets such as well-positioned battleships or cruisers as her contemporaries.

Her attack aircraft have a very long attack run in terms of distance and time. The start-up distance is actually longer than the aerial detection range of most destroyers, which combined with the long reengagement time and makes them incredibly ill-suited for destroyer hunting. This has only been further exasperated by the attack aircraft rework, adding a two-second delay between the player left-clicking to begin the attack and the rockets actually firing. Along with her high altitude HE bomb drop, it makes the Franklin D. Roosevelt being extremely handicapped when dealing with enemy teams comprising mostly of destroyers, making her an inconsistent performer in competitive game modes. On the other hand, she can launch up to 52 rockets per strike, which can penetrate 33mm of armour easily deal upwards of 5000 damage to battleship superstructures per drop if aimed properly. Their wide dispersion makes them ill-suited for smaller targets, so focus on battleships (especially British and French BBs with their 32mm armour plating) and large cruisers, although they can be used against any target in a pinch.

The Franklin D. Roosevelt is the most expensive steel ship in the game, and thus one needs to really evaluate how much they need or want this ship compared to arguably more effective options like the Bourgogne. Her inability to effectively damage small or maneuverable targets greatly hampers her utility. Its aircraft are unable to traverse the map as quickly as the other carriers, which only furthers degrade the ship's "team play" value. This ship is arguably second to none in terms of racking up large damage numbers against battleships and some cruisers over the extent of a strung-out random battle, but competitive game modes will likely favour other carriers.

In conclusion, this ship plays like an Audacious with a Midway hull, even larger health pool planes, and a much longer delay between attacks. You don't play this ship to be a huge asset to the team, but to punish battleships and make their lives miserable.

As a premium ship, Franklin D. Roosevelt doesn't have any upgrades to research.

The recommended upgrades for Franklin D. Roosevelt are as follows:

As a carrier, Franklin D. Roosevelt has no risk of detonating and a very fast fire extinguishing time.

Ships of U.S.A.
Aircraft Carriers
Retrieved from "http://wiki.wargaming.net/en/index.php?title=Ship:Franklin_D._Roosevelt&oldid=315368"
Categories:
Your location:
To log in, select the region where your account is registered
CIS Europe North America Asia Republic of Korea
Or use Microsoft Login to enter WoT XBOX ecosystem
Log in