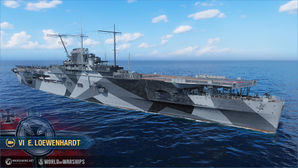 An earlier draft design for aircraft carrier "A" (Flugzeugträger A), which preceded the construction of Graf Zeppelin. Had a different composition of AA capabilities, a higher running speed, and different hull architecture.

The first thing that would catch the player's eye would be the massive 12,200 alpha for the HE bombs, and when compared to even Midway's HE bombs, Erich Loewenhardt's HE bombs outperform Midway's in damage, penetration and fire chance. While the max damage may seem very impressive, however it must be kept in mind that it is a HE bomb. To achieve the stated Alpha Damage, the bomb will have to explode inside the citadel of a ship, which at Tier VI (if not in operations), is very rare, and the bombs will mostly be doing about 2-4k damage per hit. The fire chance of her bombs are superb, so not only will they do pretty decent damage for HE bombs at Tier VI, they'll be able to quickly stack damage via fires.

While Erich Loewenhardt's dive bombers are pretty impressive, her torpedo bombers are pretty disappointingly lackluster. Already lacking in terms of damage per torpedo, they do not have the speed to help make up for it (unlike tech tree German aircraft carriers), so Erich Loewenhardt's torpedo bombers will basically be the last ditch weapon if there are no other alternatives.

Her AP rocket planes, taken from Parseval's stock AP rocket planes, feature very impressive performance for Tier VI, with a good amount of penetration and damage. Against cruisers she would see in her matchmaking spread, the AP rockets are very deadly if they're caught with their broadside open to the rockets.

A very powerful secondary battery is also another distinguishing point of Erich Loewenhardt, having a whopping 4x2 150 mm per side and 5x2 105 mm (2x2 in front of the island and 3x2 behind, in a style similar to Graf Zeppelin's 105 mm mounts), it is the heaviest secondary broadside among Tier VI carriers.

All in all, your main targets should be cruisers (since your AP rocket performance is splendid for Tier VI). The other 2 squadron types should only serve as damage supplements for when there's either no cruisers to hit or when you're waiting for your rocket planes to regenerate.

As a premium ship, Erich Loewenhardt doesn't have any upgrades to research.

The recommended upgrades for Erich Loewenhardt are as follows:

As a premium ship, Erich Loewenhardt comes with Type 10 camouflage that lowers her detection radius, reduces the accuracy of incoming shells, reduces her repair costs, and increases the amount of experience she earns.

The idea of a German aircraft carrier was born in 1933, when Adolf Hitler took the post of German chancellor and initiated the Luftwaffe as new branch in the German military. This gave birth to the idea of utilizing aircraft to provide extended vision for the surface ships via float planes and to have an aviation ship with following demands (dated March 1933):

Capable of operating in the Northern Seas and the Atlantic
A displacement of 15,000 tons
Speed of 33kn
Either nine 150mm guns or six 203mm guns, as well as a strong anti-air-artillery
Operational range of 12,000nm
Armor on the level of a light cruiser
60 aircraft, of which a third must have foldable wings
Two catapults
Minimum flight deck length of 180m

Lacking carrier experience as well as not having access to in-depth plans of foreign designs the design team was met with the difficulty of meeting those demands while also working under time pressure. This led to taking visual input from the British Courageous-class of carriers with a multiple flight deck design study, which was completed within a year, but the 203mm artillery had been completely discarded in favor of a 150mm artillery. What followed was a ship design that would be justified by the Anglo-German-Naval Agreement, which permitted Germany a carrier force of 38,500 tons, or two units with 19,250 tons each. To gain more insight into carrier design the team was given limited access to the British carrier HMS Furious and the Japanese carrier Akagi. Despite latter receiving a major refit a few weeks after the inspection, the blueprints (over 100 of them) would become the foundation of the design.

The design was then finalized in 1935, and the first keels of the Graf Zeppelin-class were laid down starting 1936. During a presentation of the design to Adolf Hitler, the chancellor questioned the usefulness of heavy artillery on an aircraft carrier. His suggestion was to delete the 150mm casemates and instead install more 105mm gun mounts for increased AA defense. As the construction of Graf Zeppelin was too far underway to allow for such structural changes, this could not be met without unreasonable expenses. As such a compromise was accepted, the heavy artillery remained but a sixth 105mm twin mount would be added on the flight deck. Erich Loewenhardt represents the design of Graf Zeppelin prior to this change.

The armament consisted of sixteen 150mm L/55 C/28 guns, mounted in eight twin casemates along the side of the hull. These could fire a 45kg heavy projectile at ranges up to 22km, and would also allow for barrage fire against plane formations using time fuzed shells. The primary anti air weaponry consisted of ten twin mounted 105mm L/65 C/33 guns, with three mounts being placed superfiring aft of the island and two in front. These could fire a 15.1kg heavy shell with 15-18 rounds per minute. Despite being labeled as anti-air weapon, they were also able to engage surface targets. Medium anti air weapon was the 37mm Flakzwilling 30, of which 22 barrels in 11 twin mounts were placed along the sides of the flight deck and the island. Close range defenses were ensured by eight 20mm guns.

To meet the high speed demands, Erich Loewenhardt is equipped with a four shaft (unique to ships of the Kriegsmarine) propulsion. Sixteen boilers, each delivering 60 tons of 450°C hot steam at roughly 1,150psi (75atü) pressure per hour, power four sets of geared turbines to develop 200,000shp. This was projected to allow for a maximum speed of 36.5kn for a short period of time, with 34.5kn being the highest sustainable speed. A fuel oil reserve of 5,187 tons was to allow a cruising range of either 11,480nm at 15.3kn or 8,000nm at 19kn. The main machinery was subdivided into four boiler rooms and three turbine rooms, each boiler room housing four boilers and the turbines for the outer shafts sharing the same turbine room. Electric power was developed in four auxiliary machinery rooms, with in total five Diesel generators and six turbogenerators, for a maximum output of 2,280kW at 220V.

Aircraft were stored in two hangar decks, each being 6m tall and offering a total of 5,450m^2 surface for plane storage. Three electrically powered elevators, measuring 13m(length) x 14m(width) connected the hangar decks with the 244m long and 30m flight deck. Travelling from the upper hangar deck to the fligth deck would take roughly eight seconds when loaded with 6,500kg. To allow for rapid launches a system of carts was developed, and the plane would be brought up to te flight deck sitting on such a cart. From there it would be brought to the front, where the pneumatic catapult was placed, and then launched. The cart would remain on the ship and be delivered to the upper hangar deck via a rail system. The pneumatic reserves allowed for nine launches per catapult, meaning that after eighteen planes it would take 50 minutes to recharge the catapults. Until then planes could only launch conventionally, using the length of the flight deck. Four cables for catching landing planes were installed, allowing for a brake distance of 20-30m.

Ships of Germany
Aircraft Carriers
Retrieved from "http://wiki.wargaming.net/en/index.php?title=Ship:Erich_Loewenhardt&oldid=317214"
Categories:
Your location:
To log in, select the region where your account is registered
CIS Europe North America Asia
Or use Microsoft Login to enter WoT XBOX ecosystem
Log in