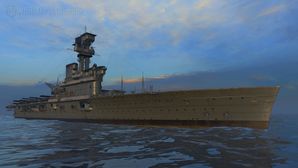 One of the first aircraft carriers of special construction in the world. The ship featured very good speed for her time, had armor protection similar to that of a cruiser, and carried quite a powerful secondary battery. One of her drawbacks was the small size of her aircraft hangar.

Hermes is a good mobile Tier IV CV with excellent planes. Her torpedo bombers allow you to drop multiple torpedos due to its good turning radius and intuitive aiming guide. Although the HE bombers lack penetration on tier 4 and below battleships, they are highly effective against cruisers. Attack aircraft arm and launch rockets quite fast, allowing you to make mistakes and still get hits. Also they are very effective in hunting and killing enemy destroyers. Overall, Hermes players should maximize their damage with carful target selection and DOT damage through floods and fires.

The recommended upgrades for Hermes are as follows: 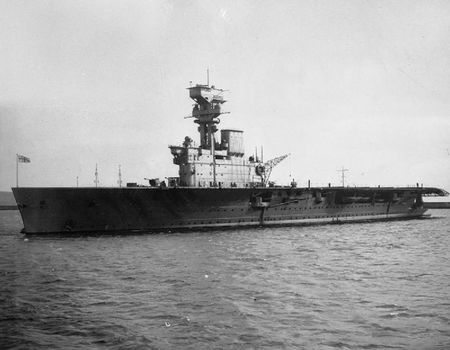 HMS Hermes was a British aircraft carrier built for the Royal Navy and was the world's first ship to be designed as an aircraft carrier, although the Imperial Japanese Navy's Hōshō was the first to be launched and commissioned. The ship's construction began during the First World War but not completed until after the end of the war, delayed by multiple changes in her design after she was laid down. After she was launched, the Armstrong Whitworth shipyard which built her closed, and her fitting out was suspended. Most of the changes made were to optimize her design, in light of the results of experiments with operational carriers.

Finally commissioned in 1924, Hermes served briefly with the Atlantic Fleet before spending the bulk of her career assigned to the Mediterranean Fleet and the China Station. In the Mediterranean, she worked with other carriers developing multi-carrier tactics. While showing the flag at the China Station, she helped to suppress piracy in Chinese waters. Hermes returned home in 1937 and was placed in reserve before becoming a training ship in 1938.

When the Second World War began in September 1939, the ship was briefly assigned to the Home Fleet and conducted anti-submarine patrols in the Western Approaches. She was transferred to Dakar in October to cooperate with the French Navy in hunting down German commerce raiders and blockade runners. Aside from a brief refit, Hermes remained there until the fall of France and the establishment of Vichy France at the end of June 1940. Supported by several cruisers, the ship then blockaded Dakar and attempted to sink the French battleship Richelieu by exploding depth charges underneath her stern, as well as sending Fairey Swordfish torpedo bombers to attack her at night. While returning from this mission, Hermes rammed a British armed merchant cruiser in a storm and required several months of repairs in South Africa, then resumed patrolling for Axis shipping in the South Atlantic and the Indian Ocean.

In February 1941, the ship supported Commonwealth forces in Italian Somaliland during the East African Campaign and did much the same two months later in the Persian Gulf during the Anglo-Iraqi War. After that campaign, Hermes spent most of the rest of the year patrolling the Indian Ocean. She was refitted in South Africa between November 1941 and February 1942 and then joined the Eastern Fleet at Ceylon.

Hermes was berthed in Trincomalee on 8 April when a warning of an Indian Ocean raid by the Japanese fleet was received, and she sailed that day for the Maldives with no aircraft on board. On 9 April a Japanese scout plane spotted her near Batticaloa, and she was attacked by several dozen dive bombers shortly afterward. With no air cover, the carrier was quickly sunk by the Japanese aircraft. Most of the survivors were rescued by a nearby hospital ship, although 307 men from Hermes were lost in the sinking.

Ships of U.K.
Aircraft Carriers
Retrieved from "http://wiki.wargaming.net/en/index.php?title=Ship:Hermes&oldid=325057"
Categories:
Your location:
To log in, select the region where your account is registered
CIS Europe North America Asia
Or use Microsoft Login to enter WoT XBOX ecosystem
Log in