Homepage/
World of Warships/
Kearsarge B

Jump to: navigation, search
12.0
Kearsarge B 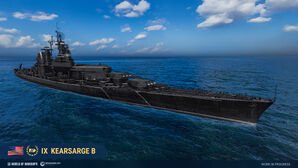 A unique project of a powerful battleship-carrier developed in the U.S. in the second half of the 1930s (Project 1058.1).

Kearsarge B was first released for sale on 18 November 2022.

Kearsarge B, or Kearsarge Black, is a clone of Kearsarge with an attractive black skin.

The Tier IX hybrid battleship Kearsarge B appears at a glance to be a frankensteined Montana, North Carolina, Bogue, and Midway. She is armed with the traditional heavy guns of a battleship yet also brings a squadron of attack aircraft to the fight. While her ungainly appearance may be off-putting to some, she may just surprise those willing to take the helm.

Kearsarge B's armored belt consists of a lower belt with 254mm thickness, a middle section with 330mm thickness and an upper belt at only 38mm thick. Her bow and stern at 32mm thick are in theory capable of bouncing 16-inch shells but it most likely will not feel that way in battle. With her large flight deck that occupies most of amidships, she takes a lot of damage to this area. As of this writing it does NOT saturate.[1] so enemy captains capable of hitting this massive area with little to no difficulty can farm damage at will. At 84,300 health points she has the largest health pool of the Tier IX American battleships which does help to offset this, but she also has the worst torpedo damage reduction at just 24%. As a result, she will not hold up in a one on one fight and captains will find themselves in trouble quickly if they are too aggressive.

Kearsarge B has some of the worst maneuverability of Tier IX American battleships. Her speed at 30 knots base is okay. But she is sluggish with a 1050m turning circle radius — worse than the larger Tier X American battleships — and a rudder shift time of 18.4 seconds. Captains will struggle to respond quickly to emergency situations. Her base surface detection is 16.9km (14km from the air) so she isn’t exactly a subtle ship. Together with her armor profile, this suggests more of a support ship staying at range where she can better respond to situations and decrease the chance that she is shot at.

Kearsarge B is armed with twelve 406mm/45 mk.6 rifles in four triple turrets. These are the same guns found on her lower tiered sister North Carolina, with a few differences. With two turrets forward and two back she boasts surprisingly good firing angles considering the large flight deck amidships. Captains can bring all of her guns to bear while showing a surprisingly small amount of her side to the enemy. While on paper Kearsarge B has better stated dispersion than her lower tiered sister it is because she has a shorter range at just 19.6km. [2] She does have access to Artillery Plotting Room Module 2 to extend her range. Combining typical USN accuracy with a potential broadside of 157,200 damage she can pack a heavy punch against broadside battleships and especially enemy cruisers.

Kearsarge B boasts a potentially stronger secondary battery with fourteen dual-purpose 127mm guns per side per side — eight more 5" rifles than any other USN battleship. With a base reload of 6 seconds (slower than those on other USN BBs) and a base range of 7km, these guns should discourage an opponent from approaching too closely. But, considering the DPM is not as high as might be expected, and how large and sluggish she is, Secondaries is not a recommended build.

In terms of AA, she bristles with weaponry, bringing twenty 20mms, forty 40mm barrels, and her twenty-eight 5" rifles to the party. The majority of her damage is done at medium to long range or 3.5–5.8km. Planes approaching her will have a hard time living through the storm of flak before being able to drop their ordnance.

A hybrid battleship is distinguished by its aviation arm. Kearsarge B launches a flight of five F8F Bearcats each armed with three Tiny Tim rockets. As with the Russian carriers, all planes in the flight attack at the same time so each launch is one and done. Tiny Tim rockets are very dangerous to an enemy ship, with a 33% chance of causing a fire, a solid 68mm of penetration, and 5400 damage each. Unlike an aircraft carrier the captain does not need to worry about running out of planes. The two minute ready timer starts at each launch and another flight is ready as soon as it expires.

Although capable of significant damage, don't focus on the air group as the main source of damage throughout the battle. In some situations it may best be deployed to spot. In the meantime, don't neglect the potential of Kearsarge B's powerful main battery.

This is not a forgiving ship if played overly aggressively. She is simply too large and sluggish to get herself out of danger. Captains would be advised to play her as a mid range support ship from 12-15kms out to make the most out of her guns and planes. Early game, a Kearsarge B captain should try to preserve health and keep an eye on the map to position the ship to flank targets or use their planes to spot. Having preserved health, captains can afford to be more aggressive towards the later half of the battle. By this stage enemy ships should have reduced health and damaged AA suites, making it easier to strike them. The captain might be a little devious if they work with a friendly carrier or another Kearsarge B to stagger their attacks to take advantage of enemies who burn their damage control party to put ‘permanent’ floods or fires on them. Captains should be careful of the autopilot mode. It is well known that sometimes the autopilot has a mind of its own.

As a premium ship, Kearsarge B has no module upgrades to research.

Favor fire prevention/mitigation and concealment. She has little need of Attack skills.

Kearsarge B equips the following consumables:

As a premium ship, Kearsarge B comes with Default permanent camouflage and a set of permanent combat bonuses.

Ships of U.S.A.
Battleships
Retrieved from "http://wiki.wargaming.net/en/index.php?title=Ship:Kearsarge_B&oldid=324343"
Categories:
Your location:
To log in, select the region where your account is registered
CIS Europe North America Asia
Or use Microsoft Login to enter WoT XBOX ecosystem
Log in