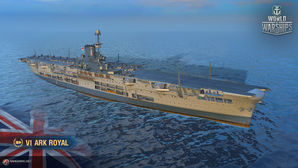 The first British aircraft carrier of a new generation. She is equipped with a continuous flight deck and modern equipment for aircraft takeoff and landing, as well as being armed with the most advanced dual-purpose artillery available in the Royal Navy during the late 1930s.

A Tier VI aircraft carrier with the unique feature of carrying large numbers of lower tier aircraft with a fast regeneration time, Ark Royal provides a rather forgiving experience for players new to aircraft carriers while also maintaining a high skill ceiling for more experienced players.

Perhaps the most unremarkable of Ark Royal's squadrons. They are the same attack aircraft as the stock attack planes found on Furious but with one more aircraft per drop to fire a barrage of 12 rockets. While the aircraft themselves have relatively high hp pools, they are rather slow, with the rockets themselves doing relatively low damage while firing in a fairly wide spread. Only consider using them in the beginning of the match to spare your other two squadrons or for quick damage when the other squadrons need to replenish their numbers.

The torpedo bombers should be considered the primary weapon of the Ark Royal against battleships and cruisers. While they are glacially slow with a top speed of only 133 knots, being only Tier IV planes, they are capable of dropping 3 torpedoes per drop, the most of any tier 6 carrier and thus giving her the highest torpedo alpha damage among her contemporaries. They also feature a very short arming distance, giving foes little time to react to a well timed drop. More practiced players of Ark Royal may take advantage of this short arming time by conducting attacks against potentially distracted destroyers, with even one hit being able to cause significant damage. Their short regeneration time of 59 seconds per aircraft also allows some degree of risk to be taken when it comes to where they can be sent.

Ark Royal's bomber aircraft, like those of other British aircraft carriers, utilize carpet bombing rather than dive bombing, requiring more lead on moving targets due to the higher altitude of the drop. Ark Royal, though, takes this bombing method to an entirely different level. With 8 bombs per aircraft and 3 aircraft per drop, Ark Royal's carpet bombers are capable of completely saturating its drop zone with 24 high explosive bombs. It should be noted, however, that these bombs are rather small and thus do little damage individually with poor penetration. The low penetration of only 19mm of armor in particular greatly precludes its usefulness against all but the most lightly armored battleships and cruisers. However, the sheer quantity they drop makes them excellent firestarters and their low penetration and damage is hardly a problem against lightly armored ships with low hp pools such as destroyers. As such, Ark Royal's carpet bombers should be used to seek out and hunt enemy destroyers or used to light fires against targets that may have prematurely used their damage control party.

The torpedo bombers have a very forgiving reticle bloom in that it still continues to tighten even when engaging in a hard turn during an attack. This can be leveraged to make very significant adjustments during an attack run to dodge flak with little consequence or even used to "fake out" a target by flying almost parallel to their path in an attack run to feign an attack on another ship before turning hard towards them to catch them by surprise.

The sluggishness of her squadrons may make it difficult to dodge flak at times. To counter this, fly over islands with steeper topography to confuse flak direction. You can also begin attacks early in order to use the preparation animation to dodge a wall of flak.

The recommended upgrades for Ark Royal are as follows:

As a premium ship, Ark Royal comes with Default permanent camouflage and a set of permanent combat bonuses. 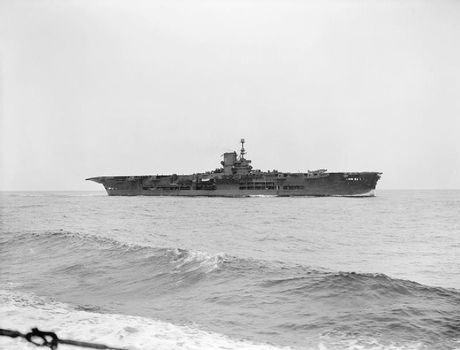 HMS Ark Royal (pennant number 91) was an aircraft carrier of the Royal Navy that served during the Second World War.

Designed in 1934 to fit the restrictions of the Washington Naval Treaty, Ark Royal was built by Cammell Laird at Birkenhead, England, and completed in November 1938. Her design differed from previous aircraft carriers. Ark Royal was the first ship on which the hangars and flight deck were an integral part of the hull, instead of an add-on or part of the superstructure. Designed to carry a large number of aircraft, she had two hangar deck levels. She served during a period that first saw the extensive use of naval airpower; several carrier tactics were developed and refined aboard Ark Royal.

Ark Royal served in some of the most active naval theatres of the Second World War. She was involved in the first aerial and U-boat kills of the war, operations off Norway, the search for the German battleship Bismarck, and the Malta Convoys. Ark Royal survived several near misses and gained a reputation as a 'lucky ship'. She was torpedoed on 13 November 1941 by the German submarine U-81 and sank the following day; one of her 1,488 crew members was killed. Her sinking was the subject of several inquiries; investigators were keen to know how the carrier was lost, in spite of efforts to save the ship and tow her to the naval base at Gibraltar. They found that several design flaws contributed to the loss, which was rectified in new British carriers.

The wreck was discovered in December 2002 by an American underwater survey company using sonar mounted on an autonomous underwater vehicle, under contract from the BBC for the filming of a documentary about the ship, at a depth of about 1,000 meters (3,300 ft) and approximately 30 nautical miles (56 km; 35 mi) from Gibraltar.

In 1923, the Admiralty prepared a 10-year building program which included an aircraft carrier and 300 aircraft for the Fleet Air Arm. The economic downturn following the First World War caused it to be postponed. In 1930, the Director of Naval Construction, Sir Arthur Johns, began to update the plans for the carrier by incorporating recently developed technology. His aim was to increase the number of aircraft carried by shortening the landing and take-off distances of aircraft using arrestor gear and compressed steam catapults respectively, which would make more deck space available for storage and aircraft preparation. Along with the inclusion of two hangar decks, this allowed Ark Royal to carry up to 72 aircraft, although the development of larger and heavier aircraft during the carrier's construction meant that the actual number carried was between 50 and 60. Ark Royal featured an enclosed hangar design where the flight deck was the 'strength deck' and was strongly built with .75in (19mm) thick Ducol steel plating. The two hangar decks were thus enclosed within the hull girder, which also gave splinter protection to the hangars. The machinery spaces were protected by 4.5-inch (11.4 cm) belt armor. Three lifts moved aircraft between the hangars and the flight deck. Another feature was the length and height of the flight deck. At 800 feet (240 m), the flight deck was 118 feet (36 m) longer than the keel; the latter dictated by the length of Royal Navy drydocks in Gibraltar and Malta. Due to the twin hangar decks, the flight deck rose to 66 feet (20 m) above the waterline. The Washington and London Naval treaties had restricted warship tonnage for a number of nations after the end of the great war and were both to expire by the end of 1936. With a potential naval arms race developing between Britain, Japan and Italy, the British government sought a second treaty, which included limiting the maximum displacement of an aircraft carrier to 22,000 long tons (22,000 t). Ark Royal would have to fit this anticipated limit; to conserve weight, armor plating was limited to the belt, engine rooms, and magazines, while welding instead of riveting 65% of the hull saved 500 long tons (510 t). Installation of an armored flight deck was not possible, as the weight would have placed Ark Royal above the proposed limit while reducing her endurance and stability. The ship was designed with a three-layer side protection system based upon a void-liquid-void scheme very similar to that used on the King George V-class battleships and was designed to protect against torpedoes with up to a 750-pound (340 kg) warhead.

The ship was fitted with six boilers, which powered three Parsons geared turbines. The turbines were connected via three driveshafts to three propellers 16 feet (4.9 m) in diameter, to produce a maximum theoretical speed of 30 knots (56 km/h; 35 mph). Speed was important, as, with catapults and arrestor gear, Ark Royal would have to turn into the wind to launch and recover aircraft. To avoid endangering other ships with the frequent course changes associated with flight operations, Ark Royal would have to break away from accompanying ships and catch up on completion. Additionally, as the carrier was not armed for ship-to-ship combat, speed was her main protection against enemy warships.

Ships of U.K.
Aircraft Carriers
Retrieved from "http://wiki.wargaming.net/en/index.php?title=Ship:Ark_Royal&oldid=319586"
Categories:
Your location:
To log in, select the region where your account is registered
CIS Europe North America Asia
Or use Microsoft Login to enter WoT XBOX ecosystem
Log in