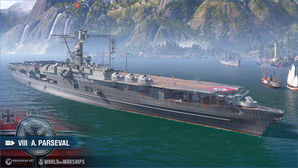 A draft design for a large, high-speed aircraft carrier, based on the Graf Zeppelin class of carriers, but equipped with a diesel propulsion plant and a different combination of armaments.

The recommended upgrades for August von Parseval are as follows:

Upgrade Slot 5 offers players A choice between Flight Control Modification 1 and Squadron Consumbales Modification 1, which adds 50% to the length of all consumables. Players wishing to have more responsive fighters and longer heals can take this upgrade in in combination with repair specialist to get 8.2 second heals on their Dive and Torpedo Bombers . As for fighters, with Enhanced reactions, search and destroy and patrol group leader you can extend the fighter duration to more then 1.5 minutes post 0.10.4.

As with all other ships, August von Parseval can mount eight signals at a time and has no risk of detonating. Players should mount Equal Speed Charlie London (for faster XP grinding / increased XP gain per battle), Zulu Hotel (when coupled with Equal Speed Charlie London greatly helps increase the speed of commander retraining), November Echo Setteseven (for better bomber self-defense against fighters and increased AA DPS), and Juliet Whiskey Unaone (to have a better chance at causing flooding and dealing damage via flooding). Players can also choose to equip the Dragon Flag for faster commander (re)training.

Ships of Germany
Aircraft Carriers
Retrieved from "http://wiki.wargaming.net/en/index.php?title=Ship:August_von_Parseval&oldid=321415"
Categories:
Your location:
To log in, select the region where your account is registered
CIS Europe North America Asia
Or use Microsoft Login to enter WoT XBOX ecosystem
Log in