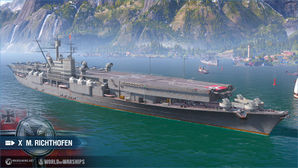 A design for completing an H-class battleship as a heavy aircraft carrier. She is a large-sized ship with armor protection that is quite good for her ship type, coupled with a very powerful AA complement.

Manfred von Richthofen is a carrier that specializes in dealing irreparable damage to all ship classes. Her high average plane speed lets her quickly react to enemy movements and provides support anywhere on the map. However, this comes at the cost of fragile squadrons and low plane reserves.

Unlike most other carriers, Manfred von Richthofen's attack aircraft carry armor-piercing rockets. One squadron contains 9 aircraft divided into 3 strikes that each fire 12 rockets. With its high speed, agility, and short machine gun period, this armament is consistent against agile targets. These munitions are similar to cruiser AP and can citadel most cruisers. However, this also causes over-penetrations on destroyers and ricochets at extreme angles. Because of this, captains must always aim for ship broadsides.

Manfred von Richthofen's torpedo bombers are an intermediate squadron to be used when the other squadrons are returning to the hull. As the fastest carrier-based torpedoes with a short arming distance, this armament deals damage with consistency. However, each torpedo deals a small amount of damage. Each squadron consists of 9 aircraft with a strike consisting of 3 planes that launch 1 torpedo each. Finally, her torpedo armament comes with an in-flight repair consumable allowing for increased survivability against ships with high AA.

Manfred von Richthofen's dive bombers carry armor-piercing bombs that deal heavy damage. A full squadron consists of 12 aircraft with a strike consisting of 3 planes each dropping 1 bomb. While each bomb has high alpha damage, they have poor accuracy as the bombs often fall towards the outer edges of the reticle. Her dive bombers also come with an in-flight repair consumable in exchange for lower individual plane health, allowing for improved survivability during strikes.

Manfred von Richthofen is a well-armored aircraft carrier that travels at 32 knots and features a 50mm armored flight deck. While no armor-piercing shells can penetrate her flight deck, high caliber high explosive shells that penetrate 50mm can damage her from any range. Her hull features a 60mm icebreaker, turtleback armor scheme, 14km base ship concealment, and a thick armor belt (145-150mm). While based on Friedrich der Große’s hull, Manfred von Richthofen is covered in standard 19mm aircraft carrier plating.

Like other Tier 10 aircraft carriers, Manfred von Richthofen does not come elite on purchase.

The recommended upgrades for Manfred von Richthofen are as follows:

The recommended upgrades for Manfred von Richthofen are as follows:

Upgrade Slot 5 offers players A choice between Flight Control Modification 1 and Squadron Consumables Modification 1, which adds 50% to the length of all consumables. Players wishing to have more responsive fighters and longer heals can take this upgrade in in combination with repair specialist to get 8.2 second heals on their Dive and Torpedo Bombers . As for fighters, with Enhanced reactions, search and destroy and patrol group leader you can extend the fighter duration to more then 1.5 minutes post 0.10.4.

It is recommended to use Günther Lütjens for improved Improved Engine Boost.

As a carrier, Manfred von Richthofen has no risk of detonating.

Ships of Germany
Aircraft Carriers
Retrieved from "http://wiki.wargaming.net/en/index.php?title=Ship:Manfred_von_Richthofen&oldid=319517"
Categories:
Your location:
To log in, select the region where your account is registered
CIS Europe North America Asia
Or use Microsoft Login to enter WoT XBOX ecosystem
Log in