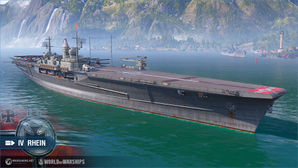 A light fleet carrier design developed during World War II that was set to go into serial production. Similar to many ships designed in Germany at that time, Rhein was supposed to be equipped with a diesel propulsion plant.

Rhein sits at tier IV as the first German aircraft carrier that players have access to. Rhein introduces the hallmarks of the German carrier line to captains: namely AP rockets that deal citadel damage, torpedoes with fast speed and low alpha damage and AP Bombers that dive from a high initial altitude. Rhein’s AP rockets differ from other nation’s attack aircraft in that they rely on citadel damage rather than penetrations and fires. Due to this, AP rockets are subject to non-penetrations and ricochets, just like normal ship-fired AP shells. Her attack planes require a broadside to get citadel hits, as angled targets will be nearly immune to her attacks. Her attack planes also only fire a limited number of AP rockets per attack run with only two attack runs per squadron. In addition to her low rocket penetration that only allows her to attack cruisers, Rhein’s AP rockets have limited effectiveness. Much like the rest of the line, Rhein has access to both fast torpedo planes and torpedoes. This is offset by her low torpedo alpha damage, which is the lowest of all tier IV carriers. This does not mean they are useless, however. The fast torpedo speed and low arming distance that her fish possess can make battleships dodging her strikes near impossible and surprise number ships like cruisers and destroyers at the hands of a skilled captain. The most distinctive feature of Rhein however comes in the forms of her AP bombers - they pack a great cruise speed, excellent citadel damage and great bomb penetration. She is able to citadel nearly every battleship and cruiser in her matchmaking spread. Unlike Japanese carriers, German carriers start their attack run at a high initial altitude and dive downwards towards their target, and Rhein is no exception. This enables her to reposition her bombers and make repeat strikes with ease, as the bomb reticule is placed directly under a squadron. Rhein’s AP bombers only drop two bombs however, which makes attacking nimbler and thinner ships like cruisers more difficult. However, she will devastate slower battleships who cannot hope to escape her fast planes. Rhein’s planes are not the only highlight of the ship. She possesses the highest ship speed - 26 knots - among all tier IV carriers in the game. While she cannot outrun a pursuing cruiser or destroyer, her speed enables her to reposition more easily than other carriers at her tier like the infamously slow Langley. Her secondaries, while only consisting of four 88mm guns (105mm on Hull B) in twin turrets, reload quickly and have the furthest range, with a base range of 4.5km. Her AA is also excellent for a tier IV carrier. It has long range, flak bursts, and high DPS. This will make enemy CVs a little gun-shy about attacking her. Overall, Rhein has a specialized allows her to deal effectively with cruisers and battleships. However, due to the nature of her armament, she has limited effectiveness against a cautious and wary destroyer captain. Her ship speed is best in her class and tier, and her secondaries, while unable to stop a pursuing ship, can nonetheless contribute to the fight. Rhein introduces captains to the major qualities of the tech tree German aircraft carriers and is a worthy start to the line.

Another side-note, written by a different author:

Rhein's armor scheme is very, very weird. It is nearly impossible to citadel her, but it can be done. Her torpedo protection is very thick, and very long. It covers nearly the entire length of the ship, and it also extends well above the waterline. Any HE shell that hits it will yield a torpedo protection hit, and deal no damage. In fact, most AP shells, at most ranges and angles, will do the same. Players wishing to damage the Rhein must aim significantly above the torpedo protection (luckily, it is quite visible at close range). If this wasn't annoying enough for attackers, shooting AP above the torpedo protection system will almost always result in overpenetrations, except by very small caliber AP (which will shatter at longer ranges). At close range, enemy captains must aim between the lifeboats on the side of the ship and the torpedo protection system. This means that, in terms of taking citadel hits, destroyer-caliber AP is actually the largest threat to Rhein, alongside bombs and plunging fire. In terms of armor, Rhein is absolutely a troll - nearly impossible to citadel with AP, regardless of range and angle causing enemies to load HE and earn torpedo protection hit ribbons instead. However, Rhein's armor should not be relied upon to save her from attack entirely.

The recommended upgrades for Rhein are as follows:

Rhein can equip the following consumables:

The consumables available for each plane type for Rhein is as follows:

Ships of Germany
Aircraft Carriers
Retrieved from "http://wiki.wargaming.net/en/index.php?title=Ship:Rhein&oldid=323761"
Categories:
Your location:
To log in, select the region where your account is registered
CIS Europe North America Asia
Or use Microsoft Login to enter WoT XBOX ecosystem
Log in