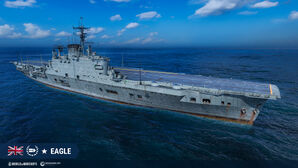 An aircraft carrier that was initially laid down as one of the Audacious-class ships. The carrier was completed to a substantially altered project and was later given an extensive modernization to carry and operate the most advanced deck-based aircraft of the 1950s, including jet aircraft.

Eagle was released into the British tech tree on 14 April 2022.

As a top-tier ship, Eagle has no module upgrades to research.

Type 1, 2, or 5 camouflage (the three have identical effects) can be equipped for credits to lower her detection radius and reduce the accuracy of incoming shells.

Ships of U.K.
Aircraft Carriers
Retrieved from "http://wiki.wargaming.net/en/index.php?title=Ship:Eagle&oldid=318283"
Categories:
Your location:
To log in, select the region where your account is registered
CIS Europe North America Asia
Or use Microsoft Login to enter WoT XBOX ecosystem
Log in