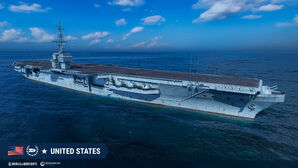 A completion variant of "super carrier" United States as a fleet strike carrier with relevant alterations to the ship's layout design and equipment.

As a top-tier ship, United States has no module upgrades to research.

Type 1, 2, or 5 camouflage (the three have identical effects) can be equipped for credits to lower her detection radius and reduce the accuracy of incoming shells.

Ships of U.S.A.
Aircraft Carriers
Retrieved from "http://wiki.wargaming.net/en/index.php?title=Ship:United_States&oldid=318279"
Categories:
Your location:
To log in, select the region where your account is registered
CIS Europe North America Asia
Or use Microsoft Login to enter WoT XBOX ecosystem
Log in