Homepage/
World of Warships/
Saipan B

Jump to: navigation, search
12.0
Saipan B 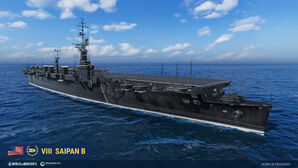 A high-speed light aircraft carrier based on the Baltimore-class cruiser. Despite relatively small dimensions, the ship carried a rather powerful air group and was armed with numerous AA artillery. The ship boasted very good armor compared to the protection of far larger strike aircraft carriers.

First available on 19 November 2021 during the Black Friday event.

Saipan B, or Saipan Black, is a clone of Saipan with an attractive black skin.

As a premium USN aircraft carrier, Saipan B’s uniqueness comes from her aircraft being very similar to Midway’s in speed, survivability, and armament count per plane. Additionally, the ship itself has much better concealment and rudder shift than her USN peers Lexington and Enterprise, allowing players to move faster to their desired location and stealthily closer to their strike targets. This gives players an edge over their same tier counterparts in faster and quicker strikes to whittle down the enemy.

However, she does not have the same attack flight size and squadron size of Midway’s nor does she have Lexington’s armor. The lack of armor means that enemy battleship salvos and torpedoes will cause much more damage to the ship when the player's ship is detected. Players must be careful of where to position their ship for maximizing their strike capabilities while keeping their ship intact.

Furthermore, while Saipan B’s torpedo bombers do carry two torpedoes each like Midway’s, this amplifies the effect of lost damage output for each plane shot down by the enemy. Furthermore, her aircraft restoration time is the longest out of all carriers currently, making each aircraft lost a massive decrease in her constant damage output. Players should carefully select targets, as randomly lashing out at any target that may have a formidable anti-air defense will result in a complete exhaust of available strike aircraft.

The culmination of these characteristics allows Saipan B to have higher overall potential damage output with most other same tier carriers. Players should attempt to use each squadron as effectively as possible through minimizing losses and getting the most damage in each attack run.

As a premium ship, Saipan B has no module upgrades to research.

The recommended upgrades for Saipan B are as follows:

As Saipan B is an aircraft carrier, there are no player-controlled ship consumables. She has standard aircraft consumables for a Tier VIII carrier.

As a premium ship, Saipan B comes with Default permanent camouflage and a set of permanent combat bonuses.

As a carrier, Saipan B has no risk of detonating and a very fast fire extinguishing time. Players should mount Juliet Yankee Bissotwo (

) to have a better chance at causing flooding to enemy ships.

The first USS Saipan (CVL-48) was a light aircraft carrier of the United States Navy, the lead ship of her class of carrier. She was later selected for conversion into a command ship in 1963–1964, but instead of becoming a command ship she was converted to the Major Communications Relay Ship Arlington (AGMR-2) in 1965.

LittleWhiteMouse's Premium Ship Review: Saipan from the NA forums -- from 2016 so largely obsolete.

Ships of U.S.A.
Aircraft Carriers
Retrieved from "http://wiki.wargaming.net/en/index.php?title=Ship:Saipan_B&oldid=319589"
Categories:
Your location:
To log in, select the region where your account is registered
CIS Europe North America Asia
Or use Microsoft Login to enter WoT XBOX ecosystem
Log in