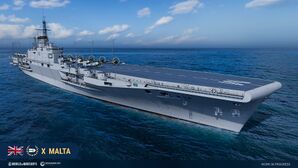 A large aircraft carrier project with an armored deck that was developed during the war years, drawing on the experience of military operations in the Pacific.

HMS Malta is a T10 British carrier that excels in dealing consistent damage to all classes (with some exceptions in each class and subs). She is equipped with the standard carrier loadout of attack, bomber, and torpedo aircraft that boast high survivability, decent speed, fast plane regen, and massive reserves allowing her to carry out strikes in dense AA. Malta’s hull is comparable to that of the HMS Audacious with some exceptions pertaining to a raised citadel roof and increased citadel side plating.

Malta’s attack aircraft carry high explosive rockets. One squadron contains 12 planes divided into 3 strikes that launch a total of 40 rockets per strike. Each rocket has decent alpha that, when coupled with a tight reticle and short aiming period, can be devastating to destroyers. With a high fire chance, these planes are also effective against battleships.

Malta’s carpet bombers carry armor-piercing bombs with low penetration capabilities. Each squadron contains 15 planes divided into 3 strikes that drop 20 bombs per strike. As with other HMS carriers, these bombers drop from a high altitude although the bombs drop much quicker and with a tighter dispersion. The low penetration allows these planes to devastate light cruisers and bulky destroyers while also dealing decent damage against battleships and heavy/large cruisers.

Malta’s torpedo bombers have slow torpedo speed with decent alpha and high flood chance. Each squadron contains 12 planes with a strike consisting of 4 planes dropping a total of 4 torpedoes per strike. With high plane HP coupled with an in-flight repair consumable, these planes are able to strike into dense AA or strike multiple times against a single target.

As a premium ship, Malta has no module upgrades to research.

The recommended upgrades for Malta are:

As a premium ship, Malta comes with Default permanent camouflage and a set of permanent combat bonuses.

Ships of U.K.
Aircraft Carriers
Retrieved from "http://wiki.wargaming.net/en/index.php?title=Ship:Malta&oldid=325043"
Categories:
Your location:
To log in, select the region where your account is registered
CIS Europe North America Asia
Or use Microsoft Login to enter WoT XBOX ecosystem
Log in