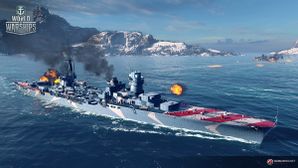 Duca d'Aosta, named after Prince Emanuele Filiberto of Savoy, 2nd Duke of Aosta, is a Tier VI Italian cruiser which features a play style unique to any other ship in game. She features eight 6-inch (152mm) guns in four turrets in an AB-XY configuration, complimented by one triple-tube torpedo launcher both her port and starboard sides. Her guns feature high velocity and flat arcs — making leading enemy ships at range easy — but are hampered by sub-par performance from her armor piercing shells; most Duca d'Aosta captains will find themselves firing almost exclusively high explosive rounds.

Her torpedoes have a 12.0 km range, allowing for some interesting uses that most other cruisers (with their shorter-ranged fish) are not capable of. However, Duca d'Aosta has a very vulnerable citadel — similar to Russian cruisers at her tier — meaning that captains must play cautiously to avoid being punished for overextending or positional mistakes. She also has a large turning radius and poor acceleration, making her vulnerable if caught in a bad situation.

As a premium ship, Duca d'Aosta doesn't have any upgrades to research.

As a premium ship, Duca d'Aosta comes included with Type 10 camouflage that lowers her detection radius, reduces the accuracy of incoming shells, and increases the amount of experience she earns. 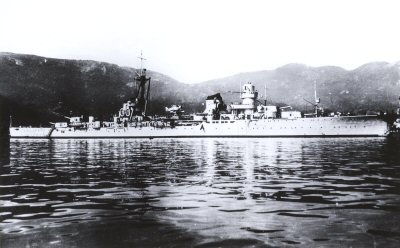