As a treaty cruiser like Pensacola and New Orleans, Indianapolis does not hold up to sustained fire well as her World War II brethren, but is noticeably more durable against other cruisers when her bow is pointed towards them. Her anti-aircraft suite is nearly identical to that of her fellow U.S. Navy cruisers in the regular tech tree, with most of her AA punch coming from her medium-range 40mm Bofors mounts. Indianapolis’ ability to mount the Surveillance Radar consumable gives her an extra leg up on stealthy ships or those concealed by smoke, as not only is she one of a handful of Tier VII ships equipped with radar, but her radar range is equal to that of Tier X's Des Moines (9.9 km). 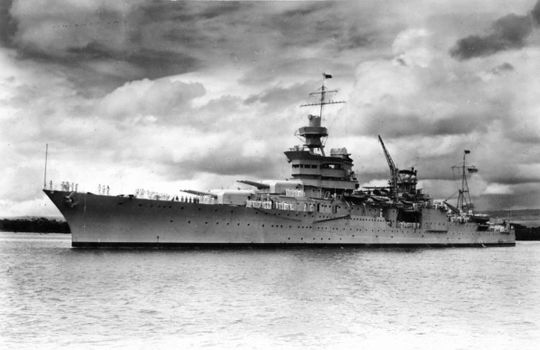 Indianapolis’ predecessors of the Pensacola class sacrificed armor to achieve a main battery of ten (10) 8-inch barrels and a 32 knot top speed. It wasn’t realized until these ships began entering service in the late 1920’s that they were significantly under treaty weight limitations; subsequently, the Navy’s Bureau of Ships set about addressing the armor inadequacies of the design. Her belt and magazine armor were both substantially increased, and her armament was set at nine (9) 8-inch rifles in three triple turrets.

At the outbreak of World War II, Indianapolis was on assignment at Johnston Atoll in the Central Pacific. She was reassigned to Task Force 11, seeing action during the Battle of the Coral Sea and, later, the re-capture of territory in the Aleutian Islands lost to Japan during the Battle of Midway. She reported to Mare Island, California for repair and refit in the summer of 1943; afterwards, she returned to Pearl Harbor in August 1943 with a new assignment as flagship of 5th Fleet under Vice Admiral Raymond A. Spruance.

Indianapolis flew Spruance’s flag for the remainder of 1943 and a significant portion of 1944, shepherding him through victories in the Marshall, Gilbert, and Marianas Island campaigns. She participated in the Battle of the Philippine Sea and the conquest of islands throughout the Central Pacific, including Iwo Jima and Okinawa.

She was gravely wounded at Okinawa in March 1945 by a Japanese kamikaze attack. When her repairs were completed in July, she was tasked with the top secret mission of transporting components of the atomic bomb “Little Boy” to the island of Tinian. Indianapolis made the 5,000 mile journey in a record-breaking ten days. She was then ordered on to Okinawa by way of Leyte Gulf. It was to be her final assignment.