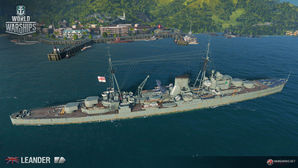 Tier VI brings a new shift in British light cruiser gameplay, as Leander takes the lessons learned from Caledon through Emerald and applies them to a more well-equipped vessel. Leander is fairly stalwart cruiser for her tier, capable of mercilessly smashing enemy destroyers, holding her ground against her cruiser contemporaries, and providing fire support as needed.

Captains familiar with Tier VI American cruiser Cleveland will feel at home in Leander. She exemplifies a ship that friendly destroyers love to ride shotgun with and enemy destroyers try their hardest to avoid (or destroy). Leander can take a fair bit of punishment from lighter enemy units due to her access to the Repair Party consumable, and while she lacks Aoba’s big guns and envies the range of Budyonny and Nürnberg, she's a fairly solid cruiser for her tier. Her upgraded torpedoes go a long way towards closing the gap between her and her contemporaries when they are used well. Her torpedo firing arcs are excellent.

Unfortunately, Leander needs to get almost suicidally close — her stock range is a paltry 12.0 km — in order to get her main battery into action, greatly increasing the risk involved when she engages enemy destroyers who have support nearby. While she can mount a Spotting Aircraft to temporarily increase her range, doing so requires her to give up Smoke Generator and a chunk of her longevity with it.

Leander is a ship that functions best with friends close by, especially given her vulnerability to battleships. She has very little she can threaten them with as long as they angle well against her armor-piercing rounds and avoid her torpedoes.

Given the paltry stock range of her main battery, the Fire Control System upgrade should be the first place experience gains are invested. After that, grab Hull (B) and the Torpedo upgrade (in that order).

Leander is very lightly armored for a Tier VI cruiser — especially compared to her contemporaries Budyonny and Cleveland — and will need to make good use use of the Repair Party and Smoke Generator consumables. Captains are recommended to invest in the premium versions of both for better survivability. Premium consumable Hydroacoustic Search will also help in hunting down destroyers and spotting torpedoes from within a smoke screen, as enemy players frequently send torpedoes into smoke banks hoping to hit stationary ships hiding within. Catapult Fighter is not recommended due to the little protection it provides and Spotting Aircraft would provide only a small bonus to her already meager range. 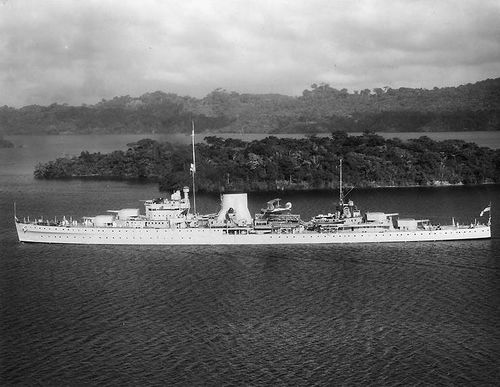 HMNZS Leander was a light cruiser which served with the Royal New Zealand Navy during World War II. She was the lead ship of a class of eight ships, the Leander-class light cruiser and was initially named HMS Leander.

Leander was commissioned in 1933 and served with the Home Fleet. In 1937, she replaced Emerald in the Royal New Zealand Navy. Serving as a shipping escort in the Indian Ocean after the beginning of World War II, Leander sank an Italian raider off India in 1941 as well as two blockade runners. Leander was assigned to assist in operations in the Persian Gulf during the Iraqi rebellion but took no action. Joining the fleet in the Mediterranean in mid-1941, Leander was engaged in patrols off Syria and fought a small action with the Vichy French destroyer Guepard in June of that year.

Leander returned to New Zealand in late 1941, then joined the ANZAC command in 1942 for operations in the Solomon Islands. Leander participated in the Guadalcanal Campaign as a convoy escort until 1943, when she joined USN CruDiv (Cruiser Division) 9. In July 1943, Leander was part of the task force which participated in the Battle of Kolombangara, where she was torpedoed and sustained heavy damage. Made fully seaworthy in late 1943, Leander sailed for Boston for full repairs, where she remained until complete just weeks after the Japanese surrender negotiations. Leander returned to the UK, where she was paid off and sold for scrapping in 1949.

Orion, commissioned in 1934, also served with the Home Fleet until 1937, when she was transferred to the Americas. After the beginning of World War II, she conducted patrol and convoy duties until 1940, when she was reassigned to the Mediterranean. Orion participated in engagements with the Italian fleet, shore bombardment of Italian positions, and convoy escort duties until 1941, when she was active in the Battle of Cape Matapan. Orion also participated in convoy duties to Greece and Crete both assisting in the transport of army troops to the region, their subsequent evacuation, and engaging Axis forces in the area. Damaged by air attack, Orion was withdrawn to South Africa, then on to California, and finally back to the UK for repairs until early 1942.

Rejoining the fleet in the Mediterranean in mid-1943, Orion helped to cover the invasions of Sicily, Salerno, and Anzio before returning to the UK in preparation for joining the Normandy invasion force in early 1944. Orion provided naval gunfire support in Normandy, and was then returned to the Mediterranean to assist in the invasion of southern France. Returning once again to the Aegean Sea, Orion supported Allied operations there before once again assisting land operations in the Mediterranean, this time off the northwest Italian coast. After the war, Orion was assigned as a target ship before being paid off and sold for scrapping in 1949.

Neptune, like Leander, Orion, and Achilles, also served with the Home Fleet until 1937, when she joined the Africa Squadron and participated in operations in the South Atlantic at the beginning of World War II. Neptune took two German merchants in 1939, and participated in the pursuit of Admiral Graf Spee. Like Orion, Neptune was assigned in 1940 to the Mediterranean, engaging in shore bombardment missions as well as a sortie into Greek waters after the Italian declaration of war on that nation.

Neptune was then reassigned to the Atlantic to counter the increased presence of German raiders, joining in the search for Admiral Scheer and the Bismarck group, and sinking one of Bismarck’s supply vessels. Returned again to the Mediterranean in 1941, Neptune operated out of Malta searching for Italian merchants on the supply routes to North Africa. In mid-December 1941, Neptune struck an astonishing four mines. Of her crew, only one survived.

Ajax was sent to the Americas upon completion in 1935, and remained there through the beginning of World War II. Patrolling off the South American coast, Ajax managed to take three German merchants before joining Force G in the search for Admiral Graf Spee which was finally run down off Argentina. In the resulting Battle of the River Platte, Ajax was heavily damaged but came out the victor when Admiral Graf Spee was scuttled. Ajax returned to the UK for repairs, joining the fleet in the Mediterranean in mid-1940. There she fought and won a small engagement, sinking several torpedo boats and damaging an Italian destroyer, as well as participating in the Battle of Cape Matapan. When not savaging Axis warships, Ajax engaged in convoy escort duties to Malta, the evacuation of Crete where she was damaged by air attack, and supporting Allied operations in Vichy Syria. She remained in the Mediterranean until mid-1942 when she was withdrawn to the UK for refit.

Returning to the Mediterranean again in January 1943, Ajax was again damaged by air attack and was withdrawn for repairs, this time to New York City, where she remained until late in the year. She returned once again to the Mediterranean, but only briefly, before being withdrawn in preparation for the Normandy invasion for which she provided naval gunfire support. Returning yet again to the Mediterranean in August 1944, Ajax supported Operation Dragoon and later Allied operations in Greece before the end of a remarkable war career. Ajax was placed on inactive status shortly after the end of the war, then sold for scrapping in 1949.

Achilles was commissioned in 1933 and, like most of her sister ships, served in the Home Fleet for several years. In 1936, she was transferred to the Royal New Zealand Navy as HMNZS Achilles. After the beginning of World War II in 1939, Achilles began operations in the South Atlantic and was attached to Force G. Participating in the Battle of the River Platte alongside her sister Ajax, Achilles sustained relatively minor damage in the first major Royal Navy victory of the war. Returning to New Zealand for convoy escort duty, Achilles formed part of the force providing cover for the influx of supplies and troops to New Zealand and Australia until 1942 when she joined the ANZAC forces.

Achilles participated in operations in the South Pacific and Solomon islands until 1943 when she was damaged by air attack necessitating a return to the UK for repairs. Leaving the UK in mid-1944, Achilles joined the Eastern Fleet until 1945. She then joined the British Pacific Fleet, accompanying the aircraft carriers as they conducted raids to suppress bypassed Japanese garrisons in the Central Pacific as well as the Home Islands of Japan. Achilles was returned to the Royal Navy in 1946. In 1947, she was sold to India, becoming INS Dehli.

Leander uses the same main battery guns as Perth, yet does not have high-explosive shells.