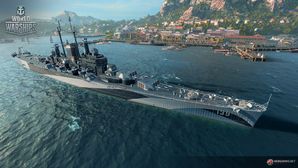 A Des Moines-class heavy cruiser. Her main battery mounts were equipped with an auto-loading mechanism, which provided her with the greatest firepower among ships of her type. The cruiser's advantages included advanced radar equipment, powerful AA artillery, and reliable horizontal armor protection.

Salem was first released for sale with Update 0.7.6 and is available exclusively in the Armory for

The first non-tech tree Tier X ship[1] in the game, Salem plays much like her tech tree sister Des Moines, albeit with more survivability at the trade off of less utility. Captains familiar with the American heavy cruiser branch should adapt to Salem’s minor quirks fairly quickly.

The largest difference between the two comes in the form of consumable choices. Des Moines can choose between

(with a 10.0 km range), Plantilla:Catapult Fighter, or Spotting Aircraft

for her Slot 3 consumable, and equips the standard version of Plantilla:Repair Party; Salem — who wasn't completed with her aircraft catapults installed — eschews aircraft entirely and has access to either

in Slot 3, and equips a specialized repair teams consumable similar to those on Royal Navy cruisers. Most other vital statistics remain identical — or roughly comparable — between the two.

The primary trait of Salem is her absurd rate of fire for a heavy cruiser: each of her barrels loads a fresh 203mm round every 5.5 seconds. The speed at which she pummels enemy targets is a sight to behold, whether she is punishing an enemy destroyer caught by her radar, or pumping super-heavy American armor-piercing shells into the sides of enemy cruisers and battleships.

Enemy aircraft carriers don't enjoy seeing a Salem on the other team either; her adequate AA suite[2] is only a touch worse than Des Moines’, as Salem here is rendered without her short-range 20mm Oerlikons.

With the handling characteristics befitting her size and the utility offered by her consumables, Salem is an excellent support ship and a late-game terror. She serves equally well as both an anti-air and anti-destroyer screening vessel; however, unlike Des Moines, Salem’s radar is not as useful in assisting in the detection of enemy destroyers due to it's shorter range.

Like her sister ship, learning to use Salem's main battery guns to their fullest requires a bit of time and adaptation. The high shell arcs and long flight times at medium to long range give her both advantages and disadvantages that other Tier X cruisers lack. She is capable of sitting behind an island and using her high shell arcs to lob shells at distant targets from cover, or — more commonly — snuggle up to an island and point her bow at the enemy, while presenting a relatively small target profile. Exploiting this technique allows her captain to turn a disadvantage into an advantage. Lobbing armor-piercing shells at bigger targets such as battleships can deal a surprising amount of damage in a short time. And the high rate of fire of her HE shells can burn any battleship to the waterline.

Salem possesses a stronger repair consumable than Des Moines, functioning identically to that of British cruisers of Tiers VIII-X. When it comes to taking fire damage, Salem is functionally immune: her heal can repair up to four full duration fires (damage from the HE shells that triggered the fires not withstanding). While the enhanced repair gives her more flexibility and survivability in the event of positioning mistakes, captains should not be relying it to keep them alive in situations that Des Moines couldn't survive.

Unlike most other Tier X cruisers, Salem cannot effectively fight as an anti-surface combatant in open water, and her slower shells prevent her from faring well in ranged firefights. Instead, captains should focus on playing defensively during the initial stages of a game, and choose areas of the map that provide hard cover and allow them to fight enemies on their own terms at short and medium range. Despite lacking a torpedo armament, the closer Salem gets to a target, the more dangerous she becomes. It should not come as a surprise that if played well, Salem can dictate the early flow of a battle, then become more aggressive in the mid- and late-game stages, quickly mopping up the enemy team with her withering rate of fire. This isn't the only way to play Salem, of course, but it's a common one; captains should adjust their play style depending on the situation to give their team the best chance of winning. Knowing when to go defensive or aggressive is key to conning Salem to victory.

As a tier X ship, Salem has no modules to research.

The primary build for Salem is for the role of gunship to take advantage of her great strength: her main battery firepower. She can be built for long range, usually coupled with an open-water emphasis. Or more usually, as a shorter-range area control fighter.

Her AA suite does support a reasonable anti-aircraft build, though this build is somewhat situational unless divisioning with an aircraft carrier.

For Slot 5, another viable build for open water maneuver is to select Propulsion Mod 1 in Slot 4 and Plantilla:Steering Gears Modification 2 in Slot 5. Plantilla:Torpedo Lookout System is also worth considering, particularly with SGM1 in Slot 4.

The recommended upgrades for a Short Range Gunship build. This build somewhat supposes the heavy use of terrain.

Slot 2 – Although Salem's radar has shorter range than others, it is still a useful tool so Plantilla:Surveillance Radar Modification 1 may be the better choice here.

The recommended upgrades for a maximum Anti-aircraft build:

Consider Outnumbered for a flank holding role. Because serious damage to Salem tends to be catastrophic, i.e. from unseen torpedoes or heavy battleship guns, the extra heal from Superintendent is not as powerful as it first appears.

Salem can equip the following consumables:

In Slot 3, choose Surveillance Radar for a Short Range gunship build. and Hydroacoustic Search for a Long Range gunship or AA support build.

The Des Moines-class cruisers could be seen as the culmination of all the efforts the United States Navy put into designing heavy cruisers to serve their purposes. Therefore unsurprisingly, the Des Moines-class was a continuation of the progress made on the previous class: the Baltimore-class.

In comparison to her predecessors, the new class of cruisers could be seen as being larger, having an improved machinery layout similar to those found on USN battleships, and increased protection with the addition of a “bomb-deck”; designed to detonated steep-angle bombs before they plunge into critical spaces.

But the most significant detail of the new class of heavy cruisers is the incorporation of a new main battery of 8”/55 caliber guns capable of auto-loading. In a certain aspect, it could be argued that the entire ship was designed with the sole purpose of housing this new armament. Work began as early as late 1943 to transfer the work done on the research of 6” auto-loading cannons and attempt to incorporate the same features into 8” heavy cruiser armament.

The characteristics in question were appealing: tests of the Mk 16 guns showed that in sustained fire drills they could maintain a rate of fire of seven shots a minute, which was twice as much as any other heavy cruiser in the fleet. Furthermore, the loading machinery allowed the guns to be serviced even at high angles of elevation, which meant that the main armament could have some ability to engage enemy air elements if need be.

Early on the Board of Ordinance planned upon the construction of 2-3 gun turrets and mounts to house them; a 3-gun solution deemed most ideal. The motivation behind this technological marvel stemmed at the inability of then-wartime heavy cruisers to hit fast-moving Japanese warships in night engagements; the rate-of-fire was simply inadequate. Despite the apparent necessity, the design for a new cruiser to house the triple-gun turret was not rushed as, by then the war was in the Allies’ favor, and the Navy wished to provide a post-war service with a satisfactory warship.

To round off the suite of armaments for the new class of cruisers, the ships incorporated the same mid-calibre battery as that of her predecessors in the form of 6 twin 5”/38 Mk 12 guns, and the extra deck space of the larger cruisers meant that the Des Moines-class could carry up to 12 twin 3”/50 caliber Mk 33 guns for close range anti-aircraft defense; an upgrade from the venerable 40mm Bofors autocannon.

USS Salem (CA-139) was the second of the three completed Des Moines-class heavy cruisers. Laid down on Independence Day, 1945 by the Bethlehem Steel Corporation in Quincy, Massachusetts, she was launched on 25 March 1947 and commissioned into the United States Navy on 14 May 1949.

The third USS Salem (CA-139) is one of three Des Moines-class heavy cruisers completed for the United States Navy shortly after World War II. Commissioned in 1949, she was the world's last heavy cruiser to enter service and the only one still in existence. She was decommissioned in 1959, after serving in the Atlantic and Mediterranean. She is open to the public as a museum ship in Quincy, Massachusetts.

Video from the above