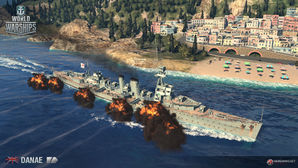 Developed from the preceding Caledon-class cruiser ships. In contrast to her predecessors, she was bigger in size and had more powerful torpedoes. Apart from that, Danae featured reinforced artillery.

At first glance, Danae might appear to suffer from the same problem that her immediate predecessor has: not enough guns. Further research, though, shows the concern is largely unwarranted. She sports six centerline-mounted 152mm rifles, and — just like Caledon — she can bring them all to bear on a single target with reasonable haste. This leaves her only a couple of guns shy of the maximum broadsides of rivals like Phoenix and Svietlana and slightly ahead of Karlsruhe. Her 8 rounds per minute rate of fire is also comparable for the tier.

As befits her light cruiser status, her armor is nothing to write home about and her health pool is below average; Danae’s ability to utilize the Repair Party consumable is key to getting the most out of her in a given game. Her maximum firing range is excellent — second only to Yubari — and her rudder shift time is also above average, though her speed places her firmly in the middle-of-the-pack. She starts off with the same torpedoes as Caledon, though in an upgraded two triple-tube per side configuration. She can research a torpedo upgrade that moderately increases the damage and speed of her fish, but unfortunately does nothing for their 6.0 km range.

Captains are recommended to research modules in the following order: the Fire Control System module first, then Hull (B), and lastly the Torpedo upgrade.

Danae is almost certain to encounter enemy aircraft carriers eventually, but her overall AA damage per second is so low that it makes sinking points into Basic and Advanced Firing Training unattractive. Captains should only do so if they intend to move the commander to a different ship that will have a better anti-aircraft suite.

Players can equip the following consumables on this cruiser: Damage Control Party, Repair Party, and Hydroacoustic Search (upon equipping Hull (B)).

As a mid-tier light cruiser, captains may find some frustration grinding through Danae; it's worthwhile to mount an Equal Speed Charlie London signal to help speed things along. It's also viable to mount India Delta because of how fragile the ship is and the fact that this cruiser has access to a heal ability. Additionally, it is worthwhile to mount November Foxtrot due to Danae’s access to three consumables (Hydroacoustic Search is unlocked upon equipping Hull (B)). 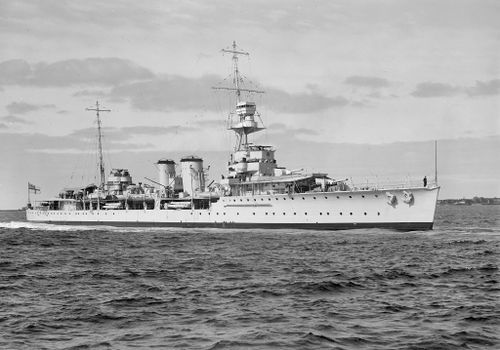 HMS Danae, during the latter part of World War II commissioned as ORP Conrad, was the lead ship of the Danae-class cruisers (also known as the D class), serving with the Royal Navy between the world wars and with the Polish Navy (ORP) during World War II.

Of the twelve D class cruisers planned, eight were completed.

Danae was commissioned in time to see service during the final months of World War I. She briefly served during post-war operations in the Baltic in 1919, taking part in anti-Bolshevik operations before being transferred back to Atlantic duties. Danae remained with the Atlantic forces until she was assigned to the Mediterranean in 1925, remaining until 1929. Danae then served in the Americas until she was paid off in 1935.

Recommissioned in 1936, Danae went east to the China station, serving until 1938 when she was again sent home to be decommissioned, but returned less than a year later to bolster Royal Navy presence as the conflict in China escalated. Danae was transferred to the Malaya Force in 1940, and served with the ABDA command during the first few months after the entry of Japan into World War II. Danae underwent a major refit and modernization in the UK, lasting from August 1942 to July 1943, then returned to the Eastern Fleet until 1944, when she took part in the Normandy landings. Danae was then lent to the Polish Navy, under the name Conrad, until the end of the war. Returned in 1946, she was paid off and sold for scrapping in 1948.

Dauntless also participated in the Baltic operations with Danae in 1919, then served in the Americas until she was decommissioned in 1924. Reactivated in 1928, Dauntless was reassigned to her old station, but ran aground in Halifax and sustained heavy damage. Repaired and returned to the Americas, she served only a year before being placed in the naval reserve. Dauntless was returned to active status in 1930, and again returned to the Americas until 1932, then the Mediterranean until 1934. In 1935, Dauntless was again sent to reserve until 1939, and was again stationed in the Americas. She remained several months only, and was, like Danae, assigned to the China station. There she remained until Japan declared war, operating with the Malaya Force, ABDA, and the eastern fleet until 1945, serving as a training ship from 1943. She was sold off for scrap in 1946.

Dehli continued the pattern of foreign service, deactivation, and reactivation typical of the class during the interwar years. She was on the reserve list at the beginning of World War II, but was promptly reactivated and assigned to the Northern Patrol where she saw good success, taking two German blockade runners. In 1940 Dehli briefly joined Force H in the Mediterranean and was present during attacks on Sardinia. She then participated in operations in West Africa before being sent to New York for conversion to an anti-aircraft cruiser which took most of 1941 to complete.

Returning to service in 1942 Dehli participated in the Torch landings where she was badly damaged by aircraft. Repaired, Dehli was present at the invasions in Sicily, Salerno, and Anzio, as well as for Operation Dragoon, the landings in Southern France. Dehli continued to operate in the Mediterranean, and was damaged again during a torpedo boat attack in the Adriatic off the port of Split. Dehli was made seaworthy but not repaired, and was used for target practice after the war ended, finally being sold off for scrapping in 1948.

Despatch also spent much of her interwar service on foreign station or in naval reserve, but was reactivated after the beginning of World War II and was assigned to the Americas until 1942, where she captured three German merchants in patrols from Chile to Brazil. In 1943, Despatch underwent a major refit, returning for the invasion of Normandy. Placed in naval reserve before the end of the war in 1945, Despatch was sold off for scrapping in 1946.

Diomede served on foreign station during the interwar period and was in reserve at the outbreak of World War II. She was also transferred to the Americas, serving there until 1942 and capturing the German merchant Idarwald off Mexico. Reassigned as a training ship in 1943, she continued in that capacity until 1945, when she was placed in reserve. Diomede was sold for scrapping in 1946.

Dragon served briefly during World War I, and was active in the interwar period on Atlantic, Baltic, Mediterranean, China, and American duties. In 1939, Dragon was with the Home Fleet, but was redeployed to the South Atlantic where she captured a Vichy French merchant in 1940 and participated in operations against Vichy forces in West Africa. In 1941 and 1942, Dragon operated against Japanese forces as part of the China station, ABDA command, and finally joined the Eastern Fleet at Colombo. Dragon was paid off in late 1942, and was lent to the Polish Navy in 1943. In 1944, Dragon participated in the Normandy landings, but was badly damaged. Declared a loss, Dragon was scuttled as a block-ship, forming part of the Mulberry harbors off the Normandy beaches.

Dunedin served in the Atlantic fleet until 1924, when she was placed on loan to New Zealand, becoming HMNZS Dunedin until replaced by Leander in 1937. Active at the beginning of World War II, Dunedin was serving with the Home Fleet, where she remained until 1940. Dunedin captured two German merchants and participated in the blockade of Martinique. In 1941, Dunedin was reassigned to the South Atlantic and captured another German merchant and two Vichy French merchants in the Central Atlantic at this time. Also scheduled for conversion to anti-aircraft cruiser, Dunedin never received the refit; she was torpedoed and sunk by a German submarine in November of 1941.

Durban was completed post-war and spent her interwar years on foreign station. In reserve when World War II began, Durban was briefly assigned to the South Atlantic, then sailed for Singapore in 1940 to join the Malaya Force as tensions with Japan were rising. Durban was damaged by air attack in February of 1942 during the evacuation of Singapore, and returned to Colombo for temporary repairs, moving on to New York and Portsmouth for completion and refit. She returned to the Eastern Fleet until 1943 when she was returned to the UK until 1944, joining the Allied forces for the invasion of Normandy. Durban was scuttled as a block-ship for the Mulberry harbors in Normandy in June of 1944.