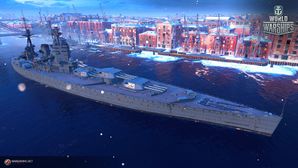 This battleship featured an innovative arrangement designed under the restrictions of the Washington Naval Treaty of 1922. The ship was armed with 406mm main guns that were concentrated in three turrets in the ship's bow. She was the first battleship in the Royal Navy to be armored according to the "all or nothing" concept.

HMS Nelson is a Tier VII premium British battleship. She is the second premium ship available that is purchased using Free Experience instead of doubloons (the first being Missouri).

Nelson features a main battery of 16-inch guns in a 3x3 configuration with all three turrets forward of the superstructure. Unlike Izumo, Nelson's turrets all face forward, allowing her to shift fire to either side very easily when bow on. Nelson features decent — if low — penetration values on her armor-piercing rounds. This makes them highly effective against enemy cruisers due to their short fuse arming time, but renders them largely ineffective against more armored battleships at range. However, Nelson also has some of the best high explosive shells available to any battleship, with very high penetration and fire chance values. She is able to utilize her HE rounds to easily burn enemy battleships, as well as stripping off AA mounts and damaging other modules.

Nelson also has a unique Repair Party consumable that is similar to those found on Lion, Conqueror and Tier VIII+ British cruisers, enabling her to heal as much as 40% of her total health pool in one use. As such, she is extremely durable with regards to fire damage. However, Nelson has a high citadel, unusual for a British battleship. Her citadel location is similar to the original Iowa and Montana citadel locations that were revised in Update 0.6.6, meaning that she will occasionally take citadel damage (especially through her 25mm bow armor). Her torpedo protection system is quite weak, and with her slow speed and high detection, she lacks the ability to control engagements the way faster ships can. Nelson’s secondaries are also not all that great, and her AA is best described as "adequate" and fit for self defense only.

Overall, Nelson is a strong battleship, with excellent firepower (for her tier) and a high resilience to fire damage balanced by her high citadel, slow speed, and weak torpedo protection.

As a premium ship, Nelson doesn't have any upgrades to research.

The recommended upgrades for Nelson are as follows:

Nelson's suggested Commander Skills are mostly to be expected, and are highly typical for those found on most Battleships. As she doesn't have particularly excellent qualities, such as the secondary armaments found on Scharnhorst and Gneisenau or the anti aircraft abilities of Hood, it is recommended to invest in survivability skills instead.

As a premium ship, Nelson comes included with Type 10 camouflage that lowers her detection radius, reduces the accuracy of incoming shells, and increases the amount of experience she earns.

HMS Nelson (pennant number 28) was one of two Nelson-class battleships built for the Royal Navy between the two World Wars. She was named in honour of Horatio Nelson, 1st Viscount Nelson the victor at the Battle of Trafalgar. The Nelsons were unique in British battleship construction, being the only ships to carry a main armament of 16 in (410 mm) guns and the only ones to carry all the main armament forward of the superstructure. These were a result of the limitations of the Washington Naval Treaty. Commissioned in 1927, Nelson served extensively in the Atlantic, Mediterranean and Indian oceans during World War II. She was decommissioned soon after the end of the war and scrapped in 1949. She was nicknamed "Nels-ol" from the resemblance in her outline to RN oilers, whose names ended in "-ol".