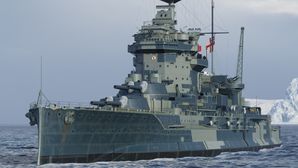 An archetypal battleship, Warspite represents all that a battleship was meant to do as one of the first superdreadnoughts sent to sea. This "Grand Old Lady" can slug it out at medium range, doing massive damage with her 15-inch guns while dodging torpedoes and shrugging off gunfire. The guns marginally outrange the 14-inch guns on New Mexico and although her Tier VI American counterpart can increase her range and her Japanese counterpart has the highest base range in the tier, this ship has better shell dispersion than the other two. Her defensive armament is decidedly average, with better secondary batteries than New Mexico and better AA batteries than Fuso. This is a warship that belongs just behind the cruisers in a battle line, providing fire support where needed and taking pressure off of less sturdy allies and in a Tier VI battle, a skilled player in a Warspite can have a huge impact in the match if circumstances are with them.

As a premium ship, Warspite doesn't have any upgrades to research.

Warspite has a base range of 5.0km for its secondary batteries and also has strong survivability capabilities as its Damage Control Party takes 90 seconds to cooldown like cruiser and its Repair Party is able to repair more damage than battleships of other nations. A build that emphasizes both these strengths can be considered.

Captains should invest in Priority Target, as the Warspite has a tight turning radius enabling it to dodge shells, Expert Marksman is a required skill as the Warspite’s turret rotation speed is abysmal. For the third skill, Superintendent maximizes the very strong Repair Party on Warspite. For the fourth skill, Advanced Firing Training helps Warspite with its AA and Secondary range, maximising its DPS output. With a build that has an emphasize on survivability captain can then take 3 three-points skill: Basics of Survivability for repairing fires faster, Vigilance to spot torpedoes from further away and use Warspite’s tight turning radius to dodge them, especially if the captain decides to brawl and finally Basic Firing Training to reinforce AA and Secondary batteries damage output.

Alternatively to two of the three 3-points skill (Basic Firing Training, Basics of Survivability and Vigilance), captains can opt for taking Concealment Expert that allows them to disengage faster in order to repair and re-position and then chose a 3-point skill (preferably Basics of Survivability) and then opt for Jack of All Trades for an additional reduction in Damage Control Party and Repair Party cooldown.

As a premium ship, Warspite comes included with Type 10 camouflage that lowers her detection radius, reduces the accuracy of incoming shells, and increases the amount of experience she earns.

HMS Warspite was a Queen Elizabeth-class battleship, the sixth warship of the Royal Navy to carry the name. Her thirty-year career covered both world wars and took her across the Atlantic, Indian, Arctic and Pacific Oceans. She was involved in several major engagements, including battles in the North Sea and Mediterranean, earning her the most battle honors ever awarded to an individual ship in the Royal Navy and the most awarded for actions during the Second World War. For this and other reasons Warspite gained the nickname the "Grand Old Lady" after a comment made by the commander of the Mediterranean Fleet, Admiral Sir Andrew Cunningham, in 1943.

When she was launched in 1913, the use of oil as fuel and untried 15-inch guns were revolutionary concepts in the naval arms race between Britain and Germany, and represented a considerable risk for Winston Churchill - then First Lord of the Admiralty - and Admiral John Fisher (who had advocated the design). However, the new "fast battleships" proved to be an outstanding success during the First World War. Warspite was refitted twice between the wars, but advances in technology and the cumulative effects of battle damage relegated her to the role of shore bombardment towards the end of the Second World War. She was decommissioned in 1945 and wrecked off the Cornish coast on the way to the scrap yard.