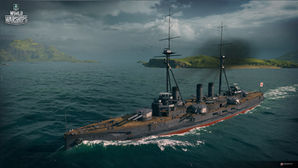 Kawachi is Japan's first dreadnought, and the first battleship in the Japanese Battleship line. First thing to note is that the Kawachi`s turret arrangement, like her German tier counterpart Nassau (which her design was actually based on), uses two wing turrets on each side of the ship in addition to her bow and stern turret; thus there will always be at least two main batteries shadowed regardless of which direction you are shooting at. Kawachi requires thirty seconds to reload a main battery, resulting in the same rate of fire as her American tier counterpart South Carolina, but significantly slower than Nassau. Like all battleships in the lower tiers, Kawachi`s shell dispersion is extremely scattered, resulting is far more misses than hits at any range but point blank.

Comparatively speaking to the South Carolina and USN Standard Battleships, the Kawachi`s speed is standard with a maximum speed of 20.4 knots, which is sufficient to keep pace with most lower tier cruisers but is still not enough for you to freely re-position on the map. Kawachi`s protection is solid, with AP penetrations from similar tier light cruiser guns fairly unlikely. Similarly, her superstructure is small and difficult to hit with HE rounds, affording her some protection from HE damage. However, 305mm cannon fire will penetrate her armor regularly and, if not angled, strike her citadel.South Carolina has the advantage in gun range at 11 km when fully upgraded. However, the IJN Kawachi has the advantage in her far smaller detection radius, allowing her to always close into gun range before being spotted. Since the ship's turrets are not super-firing like South Carolina, a valid strategy to both reduce damage and increase your damage output is to constantly turn to change your angle, allowing the use of both sets of wing turrets.

The Kawachi is not a good ship for her tier and almost always a chore for a first time battleship captain to steer. Her rate of fire is low, her speed average at best and her dispersion horrid. She is easy prey for stealth torpedoes and cannot adequately deal with charging destroyers due to her dispersion (though her secondary weapons may score a few hits). Even perfectly aimed broadsides often fail to achieve anything of notice.All in all, a poor introduction to the battleship line, especially when played poorly. Progress through this ship with haste, the following ships are far better, both in comparison to Kawachi and to their respective tiers.

Kawachi, while slow, is already able to make a faster speed than South Carolina fully upgraded. The real problem lies in her terrible gun range, which is lower than that of many cruisers at the same tier and can leave her helpless as they bombard her with impunity. The first priority is to improve her firing range, which will require the B hull to be researched first. The B hull provides a modest increase in her HP pool and a very limited AA capability, and while this doesn't affect her gun range, is required to unlock the next ship along the Japanese battleship line as well as make the Gun Fire Control System upgrade available. Next, the Gun Fire Control System can be researched and mounted, which increases gun range from 8.8 km to 9.8 km, expanding her firing range beyond her detection radius and allowing for Kawachi to fire at any enemy that sees her. Then you can top this off with the Propulsion upgrade for sorely needed maneuverability and top speed increase from 18.4 to 20 knots, which doesn't cost much and can make the grind to the next tier battleship, Myogi, more enjoyable.

As with all battleships, Kawachi comes with 8 signal flag slots. The three most important flags are India Delta, Juliet Yankee Bissotwo and India Yankee; all of which will improve your surviveability.

Kawachi (河内?) was the lead ship of the two-ship Kawachi-class dreadnought battleships built for the Imperial Japanese Navy (IJN) in the first decade of the 20th century. Following the Japanese ship-naming conventions, Kawachi was named after Kawachi Province, now a part of Osaka prefecture. During World War I she bombarded German fortifications at Tsingtao during the Battle of Tsingtao in 1914, but saw no other combat. She sank in 1918 after an explosion in her ammunition magazine with the loss of over 600 officers and crewmen.