Her AA suite — once considered sub-par — has gone through several rounds of improvements but is still unreliable, and will not save you from a dedicated carrier assault. As a capital ship, she will, of course, still be a priority target for enemy aircraft carriers, and thus captains must be wary of an enemy CV should they find themselves against one. At 30.7 knots, it may be easy for her to outrun her team; excellent map awareness and an eye on positioning of friendly ships is key to playing Tirpitz well, so much so that inexperienced players will quickly earn the bane of their teammates by failing to consider it. Many Tirpitz captains will put too much or not enough trust in her armor, either rushing too far forward for a torpedo rush and quickly sinking from a focused enemy barage, or staying too far back, where her guns are innaccurate, lose power, and make her vulnerable to plunging fire. The key to success with Tirpitz is proper positioning and knowing the right balance for your positioning in a given scenario. Being a German vessel, she was designed and built with the relatively short range battles of the northeast Atlantic and Baltic in mind, not the long range battles of the Pacific. Thus, her armor is a double-edged sword, very thick on the side for short range attacks, but very weak on the deck should a round manage to land and penetrate there. Similar to her cruiser counterparts in the German tech tree, her AP shells far outshine her HE shells, which leave much to be desired.

With her handling characteristics, there are two primary ways to drive this ship: either joining the main wave as part of the battle line, or as the capital ship for a cruiser group that did not join the main line to form a flanking unit. One important thing to remember is that Tirpitz has fallen from its place as the top brawler at tier VIII, for a number of reasons. While still a daunting opponent, the addition of the Bismarck means you can no longer be sure of beating anything at close range. With its equal secondary armament ( though no longer superior as of the range buff in update 0.6.4) and access to Hydroacoustic Search, the Bismarck is fully capable of outbrawling the Tirpitz. However, If you find yourself in a close range fight, your torpedoes can provide a valuable advantage. But if you intend to utilize a brawling playstyle, remember that you are no longer assured of victory at close range.

Secondary Battery Build: The most common build for Tirpitzk will maximize her secondary battery by equipping Secondary Battery Mod 2, along with the usual suspects for battleships: Main Armaments Mod 1 and Damage Control Mod 1. Upgrade Slot 5 offers an interesting choice between Steering Gears Mod 2 and Damage Control Mod 2 that is left to individual captains; Upgrade Slot 6 is likewise captain's choice.

Anti-Aircraft Build: Another possible build is to maximize Tirpitz’s AA suite; it is similar to the Secondary Battery Build above, but uses AA Mod 2 in Upgrade Slot 2. Players wishing to minimize their vulnerability to enemy aircraft should equip Concealment System Mod 1 in Upgrade Slot 6.

As a premium ship, Tirpitz comes included with Type 10 camouflage that lowers her detection radius, reduces the accuracy of incoming shells, and increases the amount of experience she earns.

Tirpitz also has another premium camouflage that can be earned through the Santa's Christmas Convoys event of December 2016 to January 2017. This camouflage lowers her detection radius, reduces the accuracy of incoming shells, and increases the amount of both regular experience and Free experience she earns. 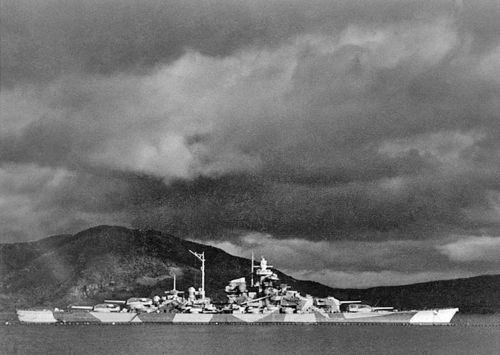