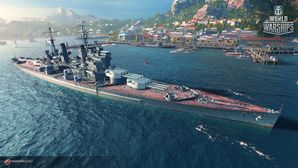 The last British battleship designed and laid down before the breakout of World War II. In many respects, the ship was a development of the King George V-class ships, but, unlike her predecessors, she had greater dimensions, heavier armor, and modern 406 mm main guns.

Lion has the ability to roar into action anywhere on a map to protect her cubs. Her low concealment makes her great at stalking and pouncing on unsuspecting prey. Keep in mind that even the mightiest of predators can fall victim to coordinated attacks. Therefore, she is best played at the head of her pride, able to be reinforced as needed. Her gameplay is very similar to that of the Iowa, with the added benefit of a strong Repair Party consumable. Use islands to mask your movements as you continue to advance and put pressure on the enemy. At the right moment, pounce!

Lion begins her life with decent teeth, but she is very weak to enemy air attacks. Therefore, it is probably best to focus on upgrading her hull first. With this, she can take more hits and be more effective on the battlefield. Afterwards, it depends on the player's style. For players who like to run and gun, the engine modification would be next, followed by gun fire control system, and finally main battery. For players who prefer to hunt and pounce on their unsuspecting prey, upgrade the ship's main battery first, followed by engine, and finally gun fire control system. Only a fully matured Lion can rule the pride.

Lion should always invest in her hunt with premium Damage Control Party, Repair Party, and Aircraft consumables. Spotting Aircraft II enables for better vision, enabling her to mangle prey. Catapult Fighter II also gives some vision, but is mainly designed to swat away the fleas and ticks at bay. Played properly, lion always repays her debts.

Never send Lion into battle naked. Most camouflages in the game come with a -3% to detectability buff, aiding with the hunt. In addition, most camouflages also come with a +4% to enemy dispersion, making it harder for them to pierce your skin. If it is time for Lion to grow up and conquer, equip camouflages with 100% to xp bonuses as well.

The Lion-class battleships were a class of six fast battleships designed for the Royal Navy in the late 1930s. They were a larger, improved version of the King George V class with 16-inch (406 mm) guns. Only two ships were laid down before World War II began in September 1939 and a third was ordered during the war, but their construction was suspended shortly afterwards. Their design changed several times in response to the removal of treaty restrictions on size and in light of war experience. None of the other ships planned were laid down, although there was a proposal to modify one of the suspended ships into a hybrid battleship/aircraft carrier with two 16-inch gun turrets and a flight deck. The two ships already begun were scrapped after the end of the war.