A rather peculiar capital ship, Scharnhorst in World of Warships is officially a battleship, but frequently plays more like a battlecruiser. Her characteristics are very cruiser-like: top speed above 30 knots with a decent rudder shift time, plus a smaller-caliber main battery than other battleships that trades alpha damage and penetration for good rate of fire and muzzle velocity. These disparities set her clearly apart from from her Tier VII counterparts Colorado and Nagato, and sister-ship Gneisenau.

Her unique traits present her with a plethora of roles to play. Scharnhorst performs very well as a cruiser hunter or destroyer killer, as her undersized shell will not over-penetrate as much, allowing for increased damage output per salvo against light-skinned targets. She is also adept at engaging distracted or over-extended battleships. If forced to go toe-to-toe with another battleship, she must use her superior speed to control the engagement, unique turtle-back armor style to mitigate damage, and employ torpedoes for punishing strikes. While her frontal and citadel armor are good, her side armor is weak enough to take devastating damage from enemy salvos if presented broadside. Scharnhorst is most comfortable at mid-to-short distance engagements, where she can use her speed to stay at range and dodge oncoming shells, or close the gap to utilize her solid secondary armament suite and deck torpedo launchers to surprise her foes — further enhanced by the correct commander skills.

The module chosen for Upgrade Slot 2 will largely determine how Scharnhorst will play. Equipping Aiming Systems Modification 1 is very popular, and helps make both her main and secondary batteries more accurate. Players who take AA Modification 2 are hedging their bets against enemy carriers at the expense of a higher chance of off-target shots. Neither of these choices lock the ship into a particular playstyle, and leave each player plenty of options with regard to maximizing Scharnhorst’s impact on the battle.

At the other end of the spectrum, highly aggressive players will equip Secondary Battery Modification 2 in this slot; coupled with the Advanced Firing Training skill and a Mike Yankee Soxsix flag, Scharnhorst’s secondary battery range pushes out past 7.5km. In this configuration, Scharnhorst puts out a punishing amount of secondary fire at a very long range; however, getting the most out of such a build requires that she spend significant amounts of time in close-combat with enemy ships.

Scharnhorst likes to get in close when possible; the skill points of her commander should reflect such a strategy. There are several viable choices for the Level 1 skill: Preventative Maintenance will help keep her main batteries in working order; Direction Center for Catapult Fighter, which provides 2 catapult fighters, providing additional assistance when the enemy carrier zeroes in on her (or for better spotting utility); or Priority Target, which is useful when Scharnhorst has to expose her broadside for a turn. Adrenaline Rush is an excellent pick at Level 2, as her reload can go down as low as 16 seconds. Expert Marksman is similarly useful, but Scharnhorst’s naturally fast turret traverse speed means that is really only useful during extreme maneuvers.

For Level 3, Vigilance combined with Catapult Fighter or Spotting Aircraft make her harder to hit with heavy torpedo salvos, while Basics of Survivability can also be useful for captains that prefer a tankier build. Demolition Expert, Superintendent, and Basic Firing Training are also solid picks. At Level 4, Concealment Expert allows her to close the distance without being spotted, dropping her detection range as low as 13.1 km, comparable to some of the larger cruisers. Fire Prevention is the recommended pick for captains focused on maximizing survivability. Her weaker-than-average anti-aircraft suite can be made more potent with Manual Fire for AA Armament, as most of her AA is concentrated in her high-caliber, long-ranged AA, which benefits significantly from the skill. 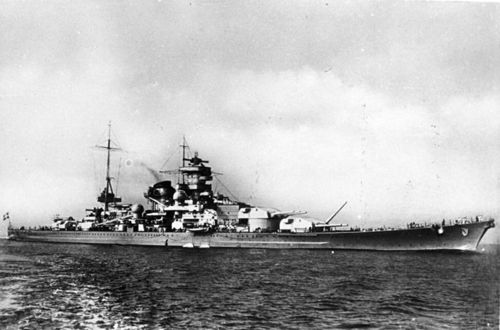 The Scharnhorst class began as an extension of the previous "Panzerschiffe" design which resulted in the Deutschland class cruisers. Because Germany was still nominally bound by the restrictions imposed under the Treaty of Versailles, the initial plan was to build a successor class to the Deutschland which would replace Elsass and Hessen, two pre-dreadnoughts Germany had been allowed to keep under the terms of the Treaty of Versailles.

It was in the early 1930s, as France began construction of the Dunkerque class, that design priorities began to change. Where the original concept was a 15,000-18,000 ton ship armed with nine 280mm guns in three turrets, the decision to change the new design so as to be competitive with the Dunkerque began to expand the size of what was to become the Scharnhorst class. The new design eventually called for sufficient armor to protect against the expected 330mm guns of Dunkerque as well as a repetition of the two triple 280mm armament of the previous Deutschland class. Weighing in at 26,000 tons, the navy was unhappy with the design, but two were ordered and laid down anyway in 1934. Just six months later, in July 1934, Adolf Hitler changed his mind, and the final design advocated by the navy, with the characteristic three triple 280mm armament and a final displacement of 35,540 tons, was authorized. The two ships were re-laid a year later.

Despite having been laid last, Gneisenau was completed first, her construction having been prioritized for propaganda purposes. She launched in May 1938 and prepared for sea trials. Gneisenau, due to the low freeboard of the class, proved to be very “wet” and received modifications to her bow in an attempt to address the issue. Scharnhorst also received a clipper bow in the summer of 1939, as well as a funnel cap. Her mainmast was re-positioned at this time, stepped between her catapult and fire director. Despite these changes, both ships continued to have a tendency to take excessive water over the bow in moderate and heavy seas.

Her final voyage (which is now referred to as the Battle of the North Cape) began on Christmas Day, 1943. Ordered to intercept two Russia-bound convoys, she sortied with five destroyers under the command of Konteradmiral Erich Bey. Having intercepted one of the convoys on 26 December, Scharnhorst, which had separated from her destroyer screen, was in turn intercepted by the convoy screen, which contained battleship HMS Duke of York, heavy cruiser HMS Norfolk, light cruisers HMS Belfast, HMS Jamaica, and HMS Sheffield, and eight destroyers. Engaged, Scharnhorst fought against numerically superior forces, blind, as her FuMO 27 radar was disabled early on due to shellfire from Norfolk. Eventually, Scharnhorst was damaged by gunfire, then torpedoed, finally sinking with heavy loss of life.