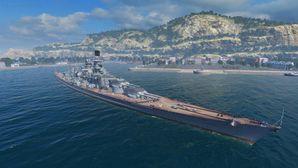 Hailing as the first post-World War I battleship design in the German battleship line at Tier VII, Gneisenau dramatically shifts from the bulky, slow-to-react dreadnoughts that are more dangerous when they get close into a post-dreadnought battleship which can do many of the same things (to a certain degree) while remaining one of the most versatile battleships at her tier.

Playing Gneisenau is decidedly different from playing her American and Japanese counterparts at Tier VII (Colorado and Nagato, respectively). While Gneisenau may appear slender and lightly armored, don't be fooled: she is deceptively durable in the hands of a captain who knows how to handle her. Her 15-inch guns give her the capability of fighting on the same level as her peers, though she does have two fewer barrels. From a handling perspective, she's the fastest battleship out of the German line, and has no trouble keeping up with cruisers as needed.

Her speed is arguably Gneisenau’s greatest asset. It allows her to close the gap with enemy battleships and force them into close range where her main battery, secondary guns, and torpedoes can deliver the killing blow. While most battleships tend to join a battle line, Gneisenau can instead join up with fast cruisers and blitz the enemy by appearing quickly from an unexpected location. She is capable of operating solo, but extra caution is needed when doing so; her main battery dispersion is frequently frustrating, making long-range combat decidedly not her strong suit. Gneisenau is most comfortable at medium-to-close range — even point-blank range — where she can make every shell and torpedo count.

Gneisenau is unique in the game as the only regular tech tree battleship to have torpedoes available; the only other battleships with torpedo tubes are her premium sister Scharnhorst and the premium version of her successor, Tirpitz. Her rakish looks hide a brutal array of secondary batteries that unload at an impressive rate of fire, and are more than capable of shredding destroyers of equal and lower tiers (higher tier destroyers are likely to have concealment values that make closing with them suicidal).

Gneisenau — like Scharnhorst — is a ship that is equally at ease diving into a melee or holding back from one. Learning when to dive in and put her secondaries and torpedoes to work (and when not to) is half the fun of learning how to play her well.

LittleWhiteMouse in the Gneisenau from the NA forums. Tested in patch 0.5.9

Hull (B) is first priority, as it comes with a boatload more hit points and secondary guns (that also contribute to her anti-aircraft defense). The engine module upgrade should be next, with the range upgrade being taken last.

Gneisenau doesn't mind brawling at close range; her commander skills and upgrades can be tailored to such tactics, or focused more on anti-aircraft defense to increase her survivability.

Anti-Aircraft Build: One possible build is to maximize Gneisenau’s AA suite; it is similar to the Secondary Battery Build below, but uses AA Guns Modification 2 in Upgrade Slot 2.

Anti-Aircraft Build: Basic Firing Training at Tier 1, Expert Marksman at Tier 2, Superintendent at Tier 3, Manual Fire Control for AA Armament at Tier 4. Additional points should be put into Advanced Firing Training when available. Gneisenau is a deathtrap for enemy planes in this configuration, with an AA bubble that can extend out as far as 7.5km (with AA Gun Modification 2 in Upgrade Slot 2) and dispensing a punishing amount of damage from her 128mm dual-purpose guns.

Both Damage Control Party II and Repair Party II are recommended for the quicker cooldowns, especially for captains who have opted for the Secondary Battery Build.

Players who wish to spend doubloons can equip Gneisenau with Type 17 camouflage that lowers her detection radius, reduces the accuracy of incoming shells, reduces her repair costs, and increases the amount of experience she earns.

Players who have followed the Secondary Battery Build above will want to equip Mike Yankee Soxisix and India Delta signals in order to further boost the effectiveness of their secondaries and Repair Party consumable, respectively.

Players following the Anti-Aircraft Build may wish to equip November Echo Setteseven for the bonus to AA gun damage. 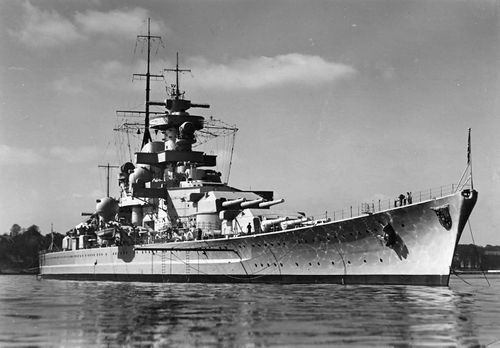 Gneisenau was a German capital ship, alternatively described as a battleship and battlecruiser, of Nazi Germany's Kriegsmarine. She was the second vessel of her class, which included one other ship, Scharnhorst. The ship was built at the Deutsche Werke dockyard in Kiel; she was laid down on 6 May 1935 and launched on 8 December 1936. Completed in May 1938, the ship was armed with a main battery of nine 28 cm (11 in) C/34 guns in three triple turrets, though there were plans to replace these weapons with six 38 cm (15 in) SK C/34 guns in twin turrets.

Gneisenau and Scharnhorst operated together for much of the early portion of World War II, including sorties into the Atlantic to raid British merchant shipping. During their first operation, the two ships sank the British auxiliary cruiser HMS Rawalpindi in a short battle. Gneisenau and Scharnhorst participated in Operation Weserübung, the German invasion of Norway. During operations off Norway, the two ships engaged the battlecruiser HMS Renown and sank the aircraft carrier HMS Glorious. Gneisenau was damaged in the action with Renown and later torpedoed by a British submarine, HMS Clyde, off Norway. After a successful raid in the Atlantic in 1941, Gneisenau and her sister put in at Brest, France. The two battleships were the subject of repeated bombing raids by the RAF; Gneisenau was hit several times during the raids, though she was ultimately repaired.

In early 1942, the two ships made a daylight dash up the English Channel from occupied France to Germany. After reaching Kiel in early February, the ship went into drydock. On the night of 26 February, the British launched an air attack on the ship; one bomb penetrated her armored deck and exploded in the forward ammunition magazine, causing serious damage and a large number of casualties. The repairs necessitated by the damage were so time consuming that it was determined to rebuild the ship to accommodate the 38 cm guns as originally intended. The 28 cm guns were removed and used as shore batteries. In 1943, Hitler ordered the cessation of conversion work, and on 27 March 1945, she was sunk as a blockship in Gotenhafen (Gdynia) in German-occupied Poland. She was eventually broken up for scrap in 1951.

Gneisenau in-game is fitted with the same 15-inch guns found on both Bismarck and Tirpitz. She and her sister Scharnhorst were to be fitted with them historically, but this upgrade never actually occurred.