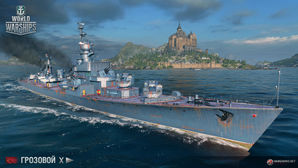 There is only the torpedo module upgrade for Grozovoi, which increases the range of the torpedoes by 2km and decreases the speed by only one knot. Players are recommended to research and mount this.

As a Tier X destroyer with access to all six upgrade slots, it's best to mount the following upgrades:

Slot 3: Main Battery Modification 3 (as it relies heavily on its main batteries) or

Slot 4: Propulsion Modification 1 (as it relies heavily on its speed as a secondary defense to incoming enemy shells)

Slot 6: Steering Gears Modification 3 (as the concealment is already poor even while firing and as aforementioned, this allows you to evade shells even better by having rudder shift similar to a USN destroyer) or

Concealment System Modification 1 (if the player wishes to utilize the ship's torpedoes more effectively through a concealment build).

If the player has one of the rare Engine Boost Modification upgrades and has the Sierra Mike signal equipped, it is worthwhile to replace the Propulsion Modification 1 upgrade, as it extends your Engine Boost consumable duration by 50%, thereby allowing you to maintain a max speed of 44.8 kts for three minutes.

As part of the new branched line of VMF destroyers, Grozovoi has access to the following consumables:

Type 1, 2, or 5 camouflage can be equipped for credits; Types 1 or 5 are recommended at a minimum to reduce the accuracy of incoming shells.

By 1942, the Soviet Navy came to understand the integral role destroyers were playing in in combat. Experience proved to them the venerability of said class: they could partake in Anti-submarine warfare, anti-air warfare, convoy protection, and mine-laying duties – amongst other proven roles. Upon assessment of their current fleet, the Soviets realized the deficiencies of their current ships; they lacked “multi-level” combat capabilities and had poor sea keeping and integrity. The proposed replacement design, Project 35, was quickly deemed incapable of meeting standards and was quickly dismissed in order to commence preparations for a new design to replace the Soviet destroyer fleet.

Project 35 was to be modified, to incorporate dual-purpose main artillery of 130mm in calibre, for greater combat flexibility, and the necessary sensor and fire control suite to ensure effective application. They also wished to include design elements observed in foreign destroyers, such as the clipper bows of British destroyers and the greater armouring of German destroyers. Accordingly the ships were increased to 2,700 tonnes of displacement.

By 1943, Central Design Bureau Nº17 was established and was charged with designing the newly dubbed Project 40 destroyers. The next year was spent creating several draft designs, in various configurations, of the new ship. Upon analyzing the drafts in 1940, it was realized that the displacement had to be increased to 3,000 tonnes to meet the technical specifications. The Bureau entered another round of redesign with further requirements modified; the ships were to have a top speed of 36 knots and a range of 6,000 nautical miles.

Project 40N is seen as the definitive version of the Project 40 destroyer designs. Increased to 4,000 tonnes, the destroyers were of a sleek design; low freeboard with a pronounced clipper bow at the front. Very much a modern design, it would have easily transitioned into the post-war era. As British experience in the North Atlantic proved, the Clipper bow would provide solid seaworthiness and dry decks.

The proposed power plant for the ships was 4 high-pressure oil-fired boilers that fed into two geared turbines; a staple of Second World War destroyer design philosophy. Rated to generate 72,000-shaft horsepower, it was expected to meet the performance requirements of a top speed of 36 knots. To ensure increased survivability the power plant was arranged “en-echelon” configuration; alternating engine room and fire room.

The new destroyers were armed with six 130mm rifles situated in three dual-purpose turrets, housing two guns each. The turrets were arranged in an “A-B-Y” configuration with two turrets at the bow and one turret at the stern. Characteristic to these rifles, they were long barrelled and could take high powder loads, thus ensured high muzzle velocities and greater range. The mounts themselves would allow the guns to elevate to +82˚ so they were effective in engaging aircraft as well. The turrets could be remotely controlled from the by the main Combat Engagement computers if need arises. Further emphasis to anti-aircraft combat was provided with the addition of 45mm AA cannons in dual mounts, under the control of independent radar systems Other staple armaments included torpedoes in two quintuple mounts, mines, and depth charge launches.

By 1945, the project had matured and the Navy considered accepting the completed designs into the postwar shipbuilding programs, but Stalin rejected this proposal; he was not fond of the “Big-Destroyer” concept and saw no future for it in his new navy. He wanted the postwar shipbuilding programs to incorporate newer designs that incorporated the emergence of new tactics and technologies. Although Project 40 itself was shelved, many of its design aspects went into the new postwar destroyers of the Soviet Navy, such as the 130mm DP armament implemented into the Project 41 destroyers, or the addition of a clipper bow to the Project 56 destroyers.