Shimakaze, hull number 125, was an experimental destroyer, envisioned as the new generation of destroyer design for the Imperial Japanese Navy, born from the 1939 4th Naval Armaments Supplement Programme. Bigger and greater in tonnage than previous types, she carried a larger, higher pressure powerplant than her predecessors, which resulted in the highest speed of any Imperial Japanese destroyer, along with the largest torpedo broadside of any previous destroyer, whilst still carrying a typical compliment of main guns.

As the pinnacle of the Japanese Destroyer tech-tree, the Shimakaze epitomizes the play-style of the main line of ships: a long-range torpedo boat with solid – albeit slightly underwhelming – artillery.

The fundamental flavor of this ship are the unmatched volume of torpedoes that can be launched at once, giving rise to the nickname "Skillakaze"; therefore players must consider which torpedoes they wish to use, as it will affect the manner in which the ship will be utilized. It must be understood that the torpedoes individually are not as good as other nation's. The high range Type 93 torpedoes have an impressive range, but the torpedo detectability range of them is exceptionally poor at 2.5 km and this coupled with the lower than typical speed means landing hits is extremely challenging. The other two options are far more viable; the Type 93 mod 3 of 12km range has an on-par high speed, significantly lower detection and the strongest punch of any torpedo; The Type F3 of 8km range has outstanding, unrivaled speed, and a quicker reload, but at the cost of slightly worse detection and lower damage. The latter choice leads itself to very risky gameplay, but they are much more likely to land on a target, whereas the former 12km option leads itself to metered, conservative gameplay. With any option great care must be taken on positioning the ship safely to launch, and in considering and predicting the enemy's expected movements.

Yūgumo and Shimakaze are the two 12.7cm-gun Japanese destroyers that enjoy relatively good gun reload and acceptable turret traverse speeds, and thus can be utilized as a reasonably acceptable gunnery platform. This is not in line with some popular conceptions about Japanese destroyers. It is worth noting that whilst the reload is acceptable and the gun's range is excellent, the damage-dealing capability will always lag behind other lines of destroyers, so more than ever direct gun trades are not advisable. Japanese torpedoes have the highest flooding chance, so using the guns to light fires and damage modules before and after torpedo attacks can form a very effective and integrated playstyle. Great care must be paid to enemy formations, especially in the case of hydro-acoustic search, radar, and enemy aircraft, as well as other ships.

In the hands of a cunning but cautious hunter, the Shimakaze can be made to shine.

Shimakaze gets three consumables: Damage Control Party, Smoke Generator, and Engine Boost. It is recommended to take premium versions of all consumables that have the resources to spare, but for those captains, whom are cash-strapped, prioritize Smoke Generator II. As it goes, a spotted DD is a dead DD; therefore having premium Smoke Generator will provide more chances to disappear from a disadvantageous situation.

Shimakaze has access to Type 1, 2, 5, or 6 Camouflage; the first three acquired via credits. Types 1 or 5 are recommended at a minimum as they reduce detectability range by sea. Players who wish to spend doubloons can equip Shimakaze with Type 20 Camouflage, which lowers her detection radius, reduces accuracy of incoming shells, increases credits & experience earned in battle, and decreases post-battle costs. 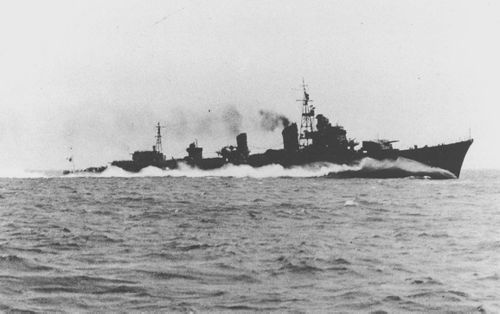